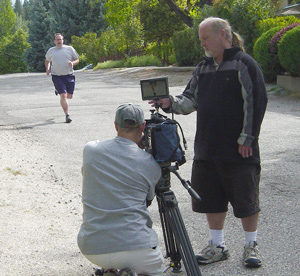 I’d like you to meet my new mates from Australia:  Adrian the sound man and Malcolm the cameraman. They were sent to our home by Beyond International to film a vignette for the television program Medical Incredible on the Discovery Health Channel. Since my miraculous healing and recovery from necrotizing fasciitis, the flesh eating bacteria, I’ve been contacted a number of times by producers of similar programs, but our plans always fell through. So, I didn’t want to broadcast this adventure until it actually materialized.

It was so much fun. They shot me running over the hill to our house about five times, up and down our street a few times, and the entire length of Gethsemane St. twice! They shot me coming and going, as well as moving along beside me in the van. I got quite a workout. 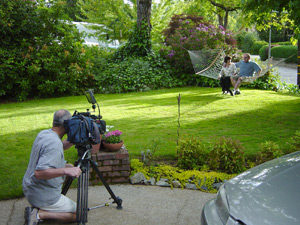 There were also family shots and what more appropriate than Denise and I relaxing in our hammock?

So, what were some highlights?