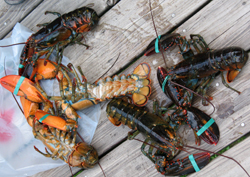 What trip to Maine would be complete without a lobster bake? And, why do they call it a bake, when you boil or steam everything? Well, that and other weighty questions of eternal consequence will have to wait until later. Right now, we’re talking about downeast cuisine.

We headed down to Brooklin to buy some lobsters from John Candage and found them for just over $5 a pound.

We got together with Bruce and Terri, Paul and Mary, Leah and Emma for some lobster, steamers, fresh corn on the cob and, of course, pie. Mary made the best coconut cream pie, with a great whipped topping.

It was Emma’s first taste of lobster and, oddly enough, she didn’t like it. Go figure! I prefer sea scallops, but I really like lobster, too. I’ve had lobster often, but learned a valuable tip this time. Clip the rubber bands off the claws, before you drop them, head first, into the boiling water. If you don’t do that, the taste of rubber will taint the delicate lobster meat. 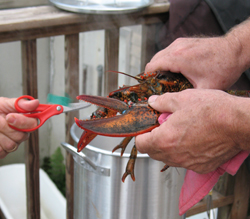 I also learned that:

Long ago, lobsters were so plentiful that Native Americans used them to fertilize their fields and to bait their hooks for fishing. In colonial times, lobsters were considered “poverty food.” They were harvested from tidal pools and served to children, to prisoners, and to indentured servants, who exchanged their passage to America for seven years of service to their sponsors. In Massachusetts, some of the servants finally rebelled. They had it put into their contracts that they would not be forced to eat lobster more than three times a week.

For those of you concerned about the inhumane practice of boiling lobster, consider it justice:

Lobsters like to eat a variety of fresh plants and animals like clams, sea urchins, and starfish. The four antennae located on a lobsters head along with the tiny hair that covers much of the lobsters body helps him to locate food; lobsters can detect motion but cannot clearly make out specific objects.   The lobster has two big claws and eight walking legs.  One claw is the crusher claw, which helps the lobster destroy something he wants to eat.  The other claw is called the pincher or ripper claw and is used to tear food apart. 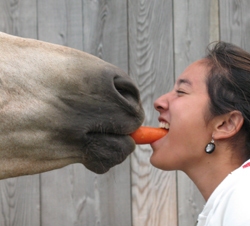 Before we sat down to our lobster feed, we needed to be sure the horses had something to eat and Leah showed us the correct way to feed a carrot to a horse.

Food Maine: The Vista From Away Travel