Dedication to the Game 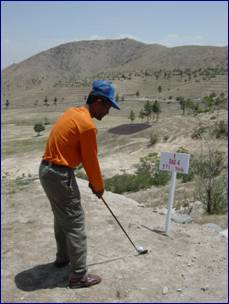 Teeing Off at the Kabul Golf Course

Regardless of your opinion of Bush’s War on Terror, I think everyone can agree that these freedom fighters have earned the respect of the world. Many groups suffered under the tyranny of the Taliban, but at least two members of the Kabul Gulf (Golf) Club have paid dearly for love of the game, going all the way back to the Soviet occupation in the 80’s.

“During the war against the Russians we were forced to close down,” said Mohammad Afzal Abdul, the 46-year-old club professional, who was a young boy when the course was built. “I told the Taliban that I used to work with foreigners,” Abdul said. “I spent three months in a Kabul jail.” Things were not much easier under Soviet-backed leaders of the late 1970s and 1980s. “I was arrested by the Communists for links with foreign diplomats and spent six months in prison,” said Mohammad Bashir Popal, who works with Abdul at the club and hails from the southern city of Kandahar.

The term “bunker” is no metaphor on a course where “the entire area has had to be cleared of mines in recent months and three Soviet tanks and a multiple rocket launcher have been removed.” Hazards also include such immovable obstructions as a bombed out barracks and country club with collapsing walls.

But, these two enthusiasts see a brighter future for golfing in Afghanistan, now that the area is teeming with western aid workers. Anyone up for a foursome?