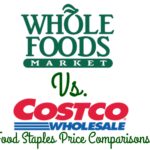 This constructive way forward to influence culture and policy came to me through exposure to the divestment movement and its questionable effectiveness. I’ve never felt good about boycotts, even during my involvement in the 70s with Evangelicals for Social Action and the boycott of Nestle. I have found a positive approach to solving problems by becoming a shareholder in major corporations that sympathize with my concerns. Rather than try to punish someone whose business does not have the same convictions about, say, gambling, alcohol consumption or smoking through divestment or boycott or political action, why not rather get on board with a business that promotes good health, fairness, and a clean environment in order to see change happen in a positive, less contentious way? I asked myself, “why not put my money into businesses where I have a voice, where the people at the top are on the same team and will lend me a sympathetic ear?”

Recently, we purchased stock in Whole Foods Market and Costco because they are progressive corporations with common goals and the ability to address some of my greatest concerns on a grand scale. Here are just a few of the ways I would like to influence Whole Foods and Costco for social good:

Those are just a few of the things I’d like to see happen and owning their stock gives me a voice. When I make my opinions known to the officers by voting and communicating with them directly, I can more effectively address the problems above because:

This is a strategy for change that takes direct action, bypassing plodding and ineffectual government agencies or NGOs, offering a less contentious solution that seeks to build partnerships and form new relationships based on optimism and hope. And, it’s probably a lot more effective than posting a meme, waving a sign or arguing with friends and relatives — it’s certainly more congenial.