WASHINGTON — In May 1998, at the urging of the state’s coal industry, the Illinois Legislature passed a bill condemning the Kyoto global warming treaty and forbidding state efforts to regulate greenhouse gases.
Barack Obama voted “aye.”

The Obama campaign did not respond to questions about his support for the coal industry, except to address his 1998 Kyoto vote. The campaign said in a statement that the Kyoto treaty did not have “meaningful and achievable emissions targets,” and that Obama “did not believe that state agencies in Illinois should unilaterally take steps to implement a global policy on their own …” The statement said Obama supports investing in technology to reduce carbon dioxide emissions from coal burning… Obama also drew criticism for sponsoring a bill in January 2007 to devote $8 billion in subsidies to a technology to convert coal to liquid fuel. The Sierra Club says liquid coal “releases almost double the global warming emissions per gallon as regular gasoline.”

As the presidential campaign was well underway in June 2007, the Obama campaign issued a clarification: He would not support liquid coal processes unless they emit a fifth less carbon than conventional fuels.

“When you’re running for president and you’ve got environmentalists biting your head off every day, that’s to be expected,” said Phil Gonet, head of the Illinois Coal Association. “We’re still optimistic that he may be helpful at some point in the future.” 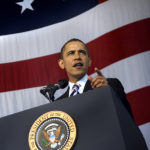 Oh, he’ll be helpful alright… if, you show him the money. Frankly, I don’t expect much change on the energy issue, except that grants and taxpayer dollars will flow with very little to show, in the way of clean energy. There is nothing remotely close to replacing oil, natural gas or coal at this point in time. It’s not because of some conspiracy or lack of research or funding. We are in the age of oil and it will transition to something else sometime in the future. If it’s not nuclear, or nucular, as every Republican seems to pronounce it, I don’t know what that replacement fuel will be.

In the interim, the progressives will make political hay out of it, while burning up millions of gallons of fossil fuels, driving their Outbacks around with their plastic kayaks or Thule carriers on top. I follow them every day, to and from work. I can barely keep up with ’em.

Oh, yes, you ask… “Am I down on alternative energy?” Heavens no! We’ve been greener than most of the hippies I’ve known for the past 30 years. Denise and I live in a small house, consume much less than your average liberal activist, drive used cars, recycle, and dry our clothes on the line. Always have. Sure, we need to keep looking for new forms of energy and I’m confident that the market and common sense will ferret them out. Until then, rather than curse the darkness I advocate buying some XOM now that it’s down in the affordable range… hang onto it for a while… they’ll probably lead the way into new sources of energy and produce a nice little nest egg for your future.