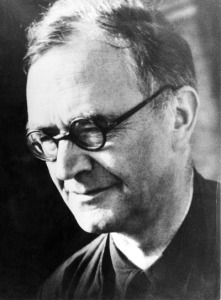 Blogging is a dangerous business for the Christian to engage in: particularly when commenting on culture, politics, religion, art, humor, sexuality or other volatile subject matter.

One can come off sounding self-righteous and condescending, as I often do — being boorish. Then, there’s also guilt by association: “That’s fine coming from the religion that gave us the Inquisition, the Crusades and the Salem Witch Hunts.” From the other direction, you open yourself up to insults by, so-called Christians, who want to hunt down witches, launch a crusade against the infidels or turn you over to the inquisitors! Indeed:

Sufferings must be the Churches most ordinary lot, and Christians indeed must be self-denying Cross-bearers, even where there are none but formal nominal Christians to be the Cross-makers… Richard Baxter

I was studying Paul’s letter to the Romans and reached for Karl Barth’s classic commentary. Barth was neo-orthodox — may have been a Universalist (which I am not) and held a nuanced, low view of Scripture, which I do not (do I smell a fire kindling?). He often unleashed a flood of meandering, baffling sentences and then, suddenly, tied them together in a very descriptive, orthodox paragraph. In what follows, Barth expresses the attitude I hope to maintain, while blogging.

God hath not cast away his people which he foreknew… Romans 11:2 (KJV)

Commenting on this verse, Barth wrote:

These words are not spoken from the security of the shore, or from the safer refuge of a lifeboat as it approaches, or pulls away from, a wreck. These words are spoken from the deck of a ship — as it sinks. Only one who is himself a Churchman knows what it is to sin against God, to betray Him and to deny Him. The man who does not know this, but thinks he is able to discover something better than the Church and its anguish, some private by-path which skirts the embarrassment of the Church and avoids that I also am, knows neither the tribulation which God has prepared for men, nor the guilt in which they are imprisoned in His presence, nor, consequently, the hope which arises in the evident misery of the Church. Hope is made known to us when we recognize that our tribulation comes from God, that it is in His presence that we are guilty, and that it is He who spreads out His hands unto a disobedient and gainsaying people.

I am often a disobedient and gainsaying Christian, intimately connected to the ekklesia, the assembly, the church which calls upon the name of Jesus, while pratically denying Him at times. Our forgiveness and justification are found in a God, Who “spreads out His hands” to a guilty and undeserving people. So, I will continue to observe and comment, sometimes critically or negatively, on a variety of issues. But, I will try to avoid an air of smug self-righteousness and will not deny my connection to “the embarrassment of the Church,” which can only exist because of what Jesus did in the Gospel: spreading out His hands at the cross. The observations and opinions on this blog are my own — please don’t hold them against my fellow Christians:

We who are strong have an obligation to bear with the failings of the weak, and not to please ourselves. Let each of us please his neighbor for his good, to build him up. For Christ did not please himself, but as it is written, “The reproaches of those who reproached you fell on me. (Romans 15:1–3 ESV)