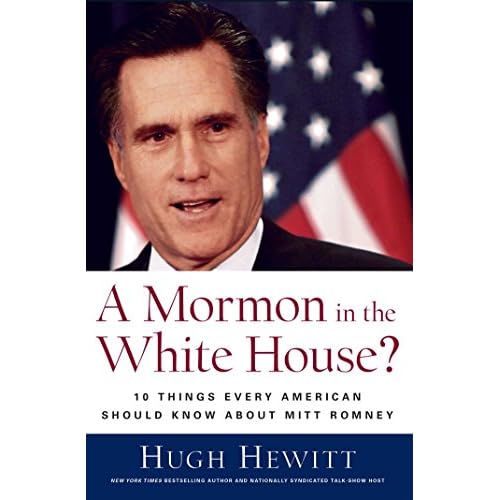 I called into the Laura Ingraham show to talk to Hugh Hewitt about his book, A Mormon in the Whitehouse? and the problems Mitt Romney will have attracting Evangelical Christians to his campaign.

I said something to the effect that “I’m an Evangelical Christian, a former Mormon — I’ve been through the Temple and sworn the blood oaths. I could vote for Mitt Romney for President. But, there are valid concerns that Evangelicals have and I think Mitt could answer them to their satisfaction.” I expected to be asked what those “concerns” are, but they moved right along with Hugh basically agreeing with me. I was followed by a caller who stated, “I’ve been LDS for 30 years, I’ve been through the Temple and I never took any blood oaths. I’ve never sacrificed a goat or anything (chuckle, chuckle).” The call tailed off into the usual dismissal of “anti-Mormons” and their erroneous claims.

If that 30 year Mormon had been through the Temple endowment and can state that he didn’t make a blood oath, then he didn’t go through the same endowment ceremony I did. What did he think he was doing when he drew his thumb across his neck and across his midsection, repeating the words “Rather than do so, I would suffer my life to be taken” if he divulged what he had seen and heard in the Temple? He must not have been paying attention to the official administering the endowment, explaining that those motions describe the various ways in which one’s life could be taken. Of course, he may have gone through the Temple after the ceremony was changed in 1990, as it had been a number of times since it was restored by Joseph Smith in the 1840s.

The next day, I called Hugh’s show and told him that my call on the Laura Ingraham show illustrated the problem I see with Romney and Evangelicals, namely: When Evangelicals discuss some of the more obscure points of LDS doctrine and history with Mormons, they appear dumfounded or totally ignorant like the caller who followed me. The Evangelical will often know more about LDS history and doctrines than the rank and file Mormon, which contributes to the perception of the LDS church as a secret society, keeping their world domination conspiracy on the DL. So, I repeated the suggestion that Hugh interview Romney and ask him questions that would address valid misgivings about Romney’s first allegiance as President of the United States. Again, Hugh agreed there was a problem and moved on to another LDS caller who made my point by declaring how ridiculous it is to think that a non-Mormon could be more knowledgeable than a Mormon about their own doctrine or history.

LDS leaders, scholars and apologists for years have acknowledged this situation and I won’t belabor the point here. Rather, I will bring up a one major concern I would have with a Mormon in the White House, which Romney would need to address before I could even consider his policy positions or leadership qualifications. That would be:

The Council of Fifty

I think Wikipedia does a good job describing this body in their brief article:

The Council of Fifty… was a theocratic Latter Day Saint organization established by Joseph Smith, Jr. in 1844 to prepare the way for a theocratic Kingdom of God that Smith thought would soon be established on the earth during the Millennium. The Council had a significant role in The Church of Jesus Christ of Latter-day Saints from 1844 to the late 1800s… Joseph Smith, Jr. and other early Latter Day Saint leaders believed this kingdom was not just the Church of Christ, but a political theocracy which Jesus would establish upon his second coming… This organization was formally established in Nauvoo, Illinois on March 11, 1844. The “clerk of the Kingdom”, William Clayton, recorded that exactly one month later, Joseph Smith was “chosen as our Prophet, Priest, and King by hosannas”, and then an ordinance was performed in which Smith was “ordained to be a king, to reign over the house of Israel forever… Unlike other organizations formed by Joseph Smith, members of the Council of Fifty were not necessarily Latter Day Saints. At its formation, there were at least three non-Latter Day Saint members. Smith was the president of the organization during his lifetime, after which Brigham Young presided, and then John Taylor… In Utah, the Council became a provisional legislative body in the government, until September 1850, when Congress organized the Territory of Utah. After Utah became a territory, the Constitutional requirements of separation between church and state sharply diminished the Council’s official role in government. The Council then suspended meetings in October 1851. Briefly, the Council resurfaced again in during the administration of John Taylor, in an advisory role on the issue of polygamy. The Council’s last recorded meeting was in 1884.

At this point I would be interested to know what Mitt Romney thinks about the Council of Fifty and if he thinks it will be necessary to prepare America for the Millennium. I doubt he gives the matter much serious thought, but he could quickly dispel any concerns with a simple statement. The early prophets of the LDS church took the Council very seriously, so I would also be interested to know what the prophet, Gordon B. Hinckley, and current LDS leaders have to say on the matter.