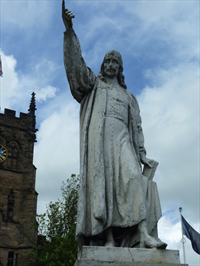 Just as Spurgeon is known as the Prince of Preachers, so Richard Baxter can be considered the Prince of Pastors. The well-known Christian author and authority on the Puritans, J.I. Packer, called him “incomparable” in his zeal and abilities as a shepherd of souls, as well as “…the most outstanding pastor, evangelist and writer on practical and devotional themes that Puritanism produced.”

Throughout the Acts and the epistles, we are given sketches of the first century pastors. The qualities outlined in Scripture must be present in any man who shepherds God’s people, but in Baxter we see them manifested with extraordinary energy and power. His flock is cared for enthusiastically, effectively, and successfully. Therefore, his life forms an ideal portrait of the pastor who shepherds God’s people for His glory and their salvation.

Baxter  worked tirelessly, intimately, “with fear and trembling” to guide his “good neighbors” to the heavenly Jerusalem. Baxter’s uncompromising love for the gospel and his earnestness for men’s salvation took him many places, but it was at  Kidderminster where he would spend twenty years, first as curate and then as vicar, with an interruption of two years as a chaplain in the Army from 1645-47. Baxter’s legendary shepherding skills were discovered and developed there, culminating in what is probably his best know work, The Reformed Pastor.

Writing of Richard Baxter, Sir Stephen James observed, “Men of his size are not to be drawn in miniature.” While this may be so, it is the hope of the writer that this “miniature” treatment of the life of Richard Baxter will serve as an introduction for Christians to one of the giants of the faith and an incentive for all believers to cultivate, in their own lives, a passionate love of God and a lifestyle of self-denial and service.

Over the coming months and years, I hope to offer a number of resources to help you get to know Richard Baxter a little more. But, for now I offer my book, Good Mr. Baxter, here online at no charge. If you would like to purchase a print version of the second, updated and improved version, you can order it right here: Good Mr. Baxter: Sketches of effective, Gospel-centered leadership from the life of Richard Baxter