Skip to content
Home > Uncategorized > Photography by "Many Others"
Published July 12th, 2006 by BoSalisbury

Photography by "Many Others"

Today, I received my copy of the new 77s DVD Collection, featuring seven official music videos by my favorite band, The Seventy Sevens, as well as another disk of “live bootleg” concert footage going back to 1982!

It was just like Christmas in July, as Sean and Emma watched me excitedly tearing the cellophane off the case. They were also very understanding and patient as I rushed to the DVD player and cued up the first video, Mercy Mercy, which I had seen years ago. It was just as I remembered it. I was at a number of the featured concerts and, though they were 20 years ago, it was as if I had seen them just yesterday. 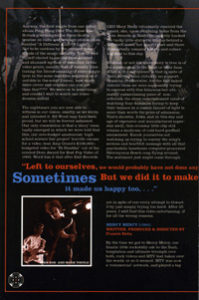 But, the most exciting discovery was yet to come. As the videos were playing and I was checking out the insert and liner notes, a familiar image caught my eye. It was a photo I had taken of the 77s at a concert back about 1987. When we went to see Mike Roe perform a few months ago, I had given him copies of the photos from that concert — he and his daughter got a good laugh out of them. But, they were actually pretty good b&w photos and he used them as a background on one of the pages. Check out the insert and my copy of the original photo. The credits on the back list a few photographers and then I am honored for my contribution:

Additional photos provided by Chris Knight, Brian Heydn and many others.

Yup, that’s me… many others!