We heard this one was good, but didn’t find it until the day before we had to fly out of Durham. Fortunately, our flight left at 1:15PM and Allen and Sons opened at 10AM. This family owned barbecue has all the amenities… a faded out, old Pepsi sign by the roadside with a burned out bulb. It’s located right next to the railroad tracks, which is always a good indicator of authentic Carolina barbecue.

The cinder block building is down-home and the sign needs paint. Out buildings include the rusting hulk of an old ice cream truck and mobile barbecue trailers, once used at fairs and stock car races and such; now, replaced by a fleet of white catering vans, they sit mute, tires flat, holding up boxes of napkins and stuff.

Mr. Allen was a butcher at an A&P Market before deciding to open up a traditional barbecue shack. He and his sons do things the old fashioned way, waking up each morning at 3AM to split the wood and begin smoking the pork; No electric oven/smoker for the Allens and that’s good news for the barbecue afficianado!

I’m glad we finished our trek here, among real country folk. The chopped pork had the smoky flavor we sought and the traditional sauce was tart and tangy, as it should be. The ribs were meaty, tender and served with a sweet sauce, more like we westerners are used to. The slaw was good and white — we never ran into the red slaw and that’s a shame. The potato salad was different than I’ve ever had. The potatos were diced small and the salad was runny. It was good, but quite sweet. We learned that sugar is in just about everything in the south. The hush puppies were great. Like Bullock’s, they leaned more toward the onion and I like that. They were also round, which is what we’re used to at Sandra Dee’s or other soul-food places in Sacramento. 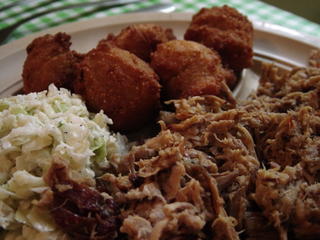 We had plenty of time to savor our final grilled banquet, but it was more food than we could polish off. So, we had to get our dessert to go and eat it later. We settled on the peach cobbler, baked about ten minutes before we arrived. I chose the coconut chess pie, which is coconut shredded (looked like frozen hash browns) in a homemade pie shell. Both were absolutely perfect and a fitting farewell to North Carolina.

We had to fill up the rental car with gas down by the airport and there we saw the one barbecue that got away. Next time we visit Emma, we’ll book a flight to arrive somewhere around supper time and schedule this one first on our itinerary.