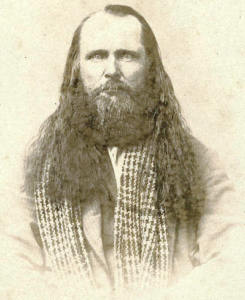 Orrin Porter Rockwell; Man of God, Son of Thunder by Harold Schindler. From the University of Utah Press:

Was Orrin Porter Rockwell a cold-blooded killer or a saint? In this balanced account, Schindler paints the thrilling portrait of a genuinely colorful individual, a unique man of the frontier west. This electrifying, stunningly illustrated biography of the most mysterious and controversial figure in Mormon history won the American Association for State and Local History’s prestigious Award of Merit.

In his fast-paced and lucid style the author pursues the man behind the legend. Was the devoted bodyguard of Joseph Smith and Brigham Young a stalwart pioneer or a vicious murderer of scores of innocent victims? Schindler’s enlightening answers make truly fascinating reading.

“Harold Schindler has attempted to strip away Churchly whitewash and Gentile vitriol to reveal Rockwell as he was. At once a Mormon and a trained police reporter, Schindler comes well-equipped fro the job. He is dispassionate in an area of American history long marred by partisanship.”—Saturday Review

“One of the best biographies of its kind.”
—The Los Angeles Times

This was the first “real” LDS history book I read, during the time Denise and I were faithful Latter-day Saints. As I remember, it did not shake my faith but changed my view of Mormon history in a positive way and added the ballast that seemed to be missing from those other histories I had read — exciting and well-written, but “thin.” It also brought me to the realization that actual characters and events are often much more interesting and engaging than anything a fiction writer can come up with. I should also mention that the book is illustrated with some very cool pen and ink drawings.

I would conclude that Rockwell was closer to the vicious murderer side of the scale and never really came away with any affection for him. He was colorful, but not in a likable way… more like a maniacal, scary Taxi Driver colorful. To this day, I still cannot travel along the Sevier River and drive through Nephi UT without feeling haunted by the ghosts of the Aiken brothers and other hapless people ol’ Port took down there to “use up.”