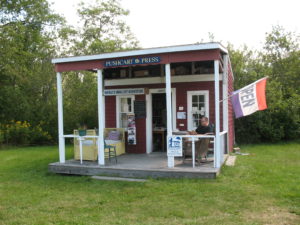 So, we met some new friends in Sedgwick Me — Joanne and Doug. They told us that Pushcart Press, the world’s smallest bookstore, is in the building at the back of what was once Donny and Eleanor’s garage and auto dealership. We stopped by to check it out. The Pushcart Prize is a prestigious literary project, pioneered by Bill Henderson over 30 years ago. As it turns out, Mr. Henderson is now a resident of Sedgwick, where I once served as Postmaster and our family wintered for a year before moving up to Blue Hill. From the PP website:

The Pushcart Prize – Best of the Small Presses series, published every year since 1976, is the most honored literary project in America. Hundreds of presses and thousands of writers of short stories, poetry and essays have been represented in the pages of our annual collections.

Writers who were first noticed here include:
Raymond Carver, Tim O’Brien, Jayne Anne Phillips, Charles Baxter, Andre Dubus, Susan Minot, Mona Simpson, John Irving, Rick Moody, and many more. Each year most of the writers and many of the presses are new to the series. 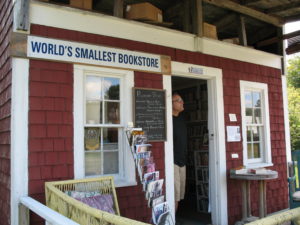