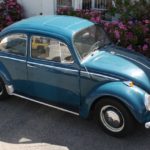 Write Fink! has been blogging about old VWs and it conjured up a few memories of — believe it or not — young romance. When I met Denise (she was 17 and I was 18), she had a blue 1966 Volkswagen Beetle much like the one in the photo. Technically, it was Brian, Denise, and Diane’s VW, but when Brian was off to school Denise had seniority and it would eventually be handed down to Diane. My heart still thumps when I think of Denise, long blonde hair blowing through the window, leaning into a turn, cranking the wheel with her left hand, while down-shifting with her right, and depressing the clutch with her Dr. Scholl’s clogs. Phew… I better cool down here.

It had one of those crank sunroofs, which meant that we didn’t need racks for my surfboard — just stuck it out the top! It got good mileage, ran well, and I remember the radio working. However, it did have one particularly annoying flaw. There was some sort of obstruction in the channel which the cables ran through to the engine compartment. It seems once every six months the clutch cable would snap in some inconvenient location: like the middle of a busy intersection, for example. Still, we enjoyed that car very much.

There were other Volkswagens in my life. A guy I worked for had a legendary old bus: white with windows and the Union Jack painted on each side on the small back panel at the back. Then, there was Joe’s bus with problems overheating. His solution? “We’ll just pull the engine.” It seems like we spent a lot of time pushing the bus away from that motor on a jack or whatever was handy that would hold it — until the last time, when the flywheel came off outside of Cloverdale CA. That’s when being a hippie became a real drag.

Joe M (preserving his anonymity) had a “rock buggy” — an original dune buggy. It was a Volkswagen Beetle, chopped, with heavy duty suspension parts and floatation tires on the back. He would sneak it out at age 14 (I was 13), late at night, and we would go forth wreaking havoc (idiots).

Andy had a ’58 bus with no windows and double doors on each side — one side welded shut. It had a dangerously small motor — 1100 =/- CCs, I think. The van was totally beat and had “Moon Unit” spray-painted on the side, as well as spirals on each hubcap. There was a reason behind the junky exterior. The year was 1973 and inside Andy had a state-of-the-art TEAC cassette player, a big amp, and some monster speakers — as well as a comfy mattress. As I recall, we just drove around listening to music real loud.

Denny’s VW was the best!