Irritation of the Sith 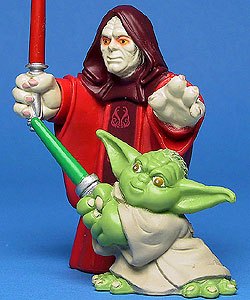 To those serious Star Wars fans out there, please believe me when I say I mean no disrespect and I admit up front that there are some days I just shouldn’t go see a film (like the ill fated, rainy evening I viewed The Thin Red Line: but, that’s another blistering post). Here’s the problem: I usually don’t recognize I’m in one of my “moods” until about ten minutes into the movie and by then, it’s too late.

I’m sure the Revenge of the Sith is a fine film, but there were so many elements of the movie that I just found distracting or annoying and I couldn’t get past them. Let’s get it over with. Here’s what bugged me:

Am I being a little too harsh on Mr. Lucas, the creative crew or the cast? I don’t think so. I made about a dozen wisecrack observations to Denise throughout the film and normally she would shsssssh me. During the Revenge of the Sith, she either responded in hushed verbal agreement or gave me the knowing, matter-of-fact “Joe Friday” nod, letting me know that we’d just witnessed the ridiculous.