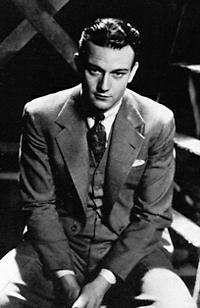 From The Telegraph Online:
Two of John Wayne’s best films from the 1950s – “The High and the Mighty” and “Island in the Sky” – have been missing in action for decades… the films, directed by William Wellman (“Wings,” “A Star Is Born”) and produced through the Duke’s own company, had fallen into disrepair… Already, “High and the Mighty” ranks No. 4 on Amazon.com’s presale orders list… Originally released in 1954, “The High and the Mighty” was one of the top-grossing films of the year and was nominated for six Oscars, including best director for Wellman and supporting actress nods for Jan Sterling and Claire Trevor; it won for Dimitri Tiomkin’s memorable score. The granddaddy of disaster films, it stars the Duke as an airplane pilot who guides a crippled airliner to safety on a flight from Hawaii to San Francisco. John Wayne wasn’t originally scheduled to be in the picture, said the director’s son, William Wellman Jr. The role of Dan Roman was to go to Spencer Tracy, but “at the last minute he decided not to do it.” Then, “they had trouble casting the two leading women,” Wellman added. “Every major star turned them down – Joan Crawford, Bette Davis and Loretta Young. So they ended up with Claire Trevor and Jan Sterling, and they both got two Academy Award nominations.”

This is certainly good news, because I have never seen these films and I’m always up for a good John Wayne flick. Yes, I said a good one. The Duke has made his share of stinkers over the years, as many fine actors have. However, growing up in the 60’s, it was often in vogue to talk about Wayne as bad actor or limited in his range or ability. This criticism has become cliche´over the years and when I hear it parroted nowadays, I simply chalk it up to ignorance or socio-politiacal elitism. The fact of the matter is, John Wayne was a talented actor and he starred in some exceptional films. Some pretty notable people from the film arts were impressed with Wayne, as an actor:

“I’ve always thought [Wayne is] underrated as an actor,” James Stewart once said. “I think The Searchers is one of the most marvelous performances of all time.”

Stewart’s sentiment has been echoed by those on the other side of the camera, as well:

Film critic and filmmaker Jean-Luc Godard once said of The Searchers: “How can I hate John Wayne upholding [Barry] Goldwater and yet love him tenderly when abruptly he takes Natalie Wood into his arms in the last reel of The Searchers?” This sentiment was also voiced by film students in the late sixties and seventies who began to revise their opinions of John Wayne after seeing him in John Ford’s most mythic film, one that was largely misunderstood when it was first released in 1956 and features what is possibly Wayne’s finest performance… Directors and screenwriters as varied in background and style as Steven Spielberg, Martin Scorsese, John Milius, Paul Schrader, Wim Wenders, Jean-Luc Goddard, and George Lucas have all been influenced and paid some form of homage to The Searchers in their work. Scorsese, perhaps the greatest filmmaker of his generation, exclaimed, “The dialogue is like poetry! And the changes of expression are so subtle, so magnificent! I see it once or twice a year”… The Searchers represents the apex of the Western genre and stands as John Ford’s most emotionally complex and sophisticated film (It was also his 115th feature film!). But it is not simply a summation of the Western themes that Ford had previously explored in his films. The Searchers is one of the first Westerns to deal in a serious and unpretentious way with racism and sexuality. As Joseph McBride wrote in his monumental Ford biography, Searching For John Ford, the director’s decision to tackle such a complicated and ambiguous film dealing with race and sex during the 1950s “was a shrewd career move, showing a willingness to make a more ‘modern’-seeming Western for an audience that wanted greater psychological realism from the genre…”Not only does [Ethan] Edwards perform the only scalping shown in the film, but Ford presents the bloody aftermath of a massacre of Indian women and children carried out by the same clean-cut cavalrymen he depicted so lovingly in films like Fort Apache.” For most viewers, however, it is John Wayne’s performance in The Searchers that is a revelation.

Oh, and one last bit of trivia from The Searchers:

John Wayne’s catchphrase in the film, “That’ll Be The Day”, inspired Buddy Holly to write his hit song of the same name.