An Afternoon With Massey Shepherd 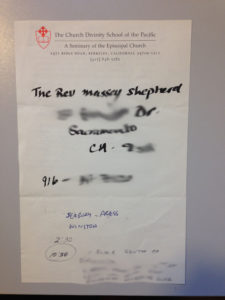 A long time ago — it seems like a couple lifetimes — anyway, a long time ago I spent a good part of the day with Massey Shepherd in the living room of his home down near Land Park in Sacramento. He had just moved there after retiring from The Church Divinity School of the Pacific, his wife had passed away, and his daughter wanted to have him nearer to family. Denise drove me down with the kids in our 1967 Chevy Bel Air, dropped me off at the house, and was off to do some shopping. I found him sorting and shelving hundreds and hundreds of books — he was tired and told me he appreciated the opportunity to take a break.

At the time, I was learning a little bit about ecclesiology and early Christian worship. I read a paper circulating on the subject that relied heavily on Massey Shepherd’s contributions to The Interpreter’s Dictionary of the Bible, but I was pretty certain the author of the paper was misrepresenting the views of this renowned scholar. My notes from that meeting in June of 1989 confirmed my conclusions. 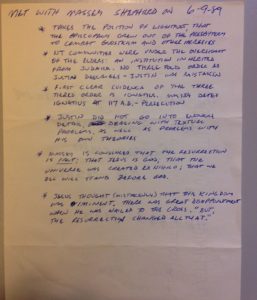 From my notes, Dr. Shepherd thought that:

Dr. Shepherd was a gentleman and that meeting, which only lasted a few hours, had a profound effect on my young Christian faith. I don’t think I took Christ’s incarnation as seriously as I should have before then.

Jesus of Nazareth, a man attested to you by God with mighty works and wonders and signs that God did through him in your midst, as you yourselves know—this Jesus, delivered up according to the definite plan and foreknowledge of God, you crucified and killed by the hands of lawless men. God raised him up, loosing the pangs of death, because it was not possible for him to be held by it. (Acts 2:22–24 ESV)