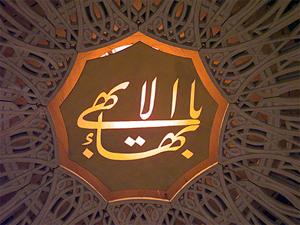 “You’ll be happy to know I got religion: I’m a Baha’i!” My guitar teacher’s enthusiastic annunciation, during another failed attempt to learn that instrument in the mid-80s, launched me on a quest that would change or affect me in ways that I could never imagine. But, more about that later. Under the Interests drop down menu, you will find what represents the fruit of my intense six-year research and immersion into the Baha’i community 30 years ago.

Over time, I hope to reenter the world of Baha’i and will be posting anecdotes and updates to the blog, as well as other pages. The first offering under this category is A Critical Examination of 20th Century Baha’i Literature, a paper I wrote for presentation at the Arc Symposium on Cults, the Occult and World Religions at William Tyndale College, August 16-18, 1990. It was a major paper, one of 9, chosen from about 100 submissions by a panel of scholars that included Dr. Norm Geisler.