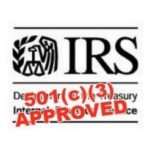 Over the past few years, I’ve learned a little bit about Section 501 (c) (3) of the IRS tax code: the tax-exempt status for religious and other charitable organizations. I began blogging about these matters in a previous post Family, Finances, and the Faith: Nepotism In The Church. By the way, I’m still learning so please point out any errors in this post in the comments below and I’ll thank you in advance.

If we survey history objectively, we have to admit that the Church in the United States enjoys a privileged relationship with the government compared to many other nations — tax exemptions on property and financial assets are not a Constitutional right (those are guaranteed to individuals) but a blessing bestowed by a government that was formed out of the nightmare of state-run, coercive churches that suppressed religious freedom. In America, freedom of worship was a priority: it still is.

I, along with a few other guys applied for the exemption for a church we planted back around 1988 and we understood what constituted a legitimate non-profit organization. But, the process and requirements have changed quite a bit since then. The most substantial shift I noticed is that the IRS wants to be sure non-profits are not actually running a for-profit business or family foundation. The IRS wants to know who is being compensated over $50,000 annually and whether compensated individuals are related through business or family connection, both employees or contractors.

For the Christian, following the letter and the spirit of the IRS code is not negotiable:

Jesus was questioned on this matter and here’s what He said:

Paul wrote to Christians in Rome, the seat of one of the most brutal and oppressive governments in all of history, and told the followers of Jesus there:

Let every person be subject to the governing authorities. For there is no authority except from God, and those that exist have been instituted by God. Therefore whoever resists the authorities resists what God has appointed, and those who resist will incur judgment… Therefore one must be in subjection, not only to avoid God’s wrath but also for the sake of conscience. For because of this you also pay taxes, for the authorities are ministers of God, attending to this very thing. Pay to all what is owed to them: taxes to whom taxes are owed, revenue to whom revenue is owed, respect to whom respect is owed, honor to whom honor is owed. (Romans 13:1–7 ESV)

More recently I have learned that, although we see increased hostility toward and pressure upon the Church in the wider culture, the IRS still respects freedom of religion and rarely looks into the affairs of non-profits. That is… unless the tax collector receives a complaint about a particular organization or a group that looks so much like a business that the legitimacy of their status is in question. If the average church or organization wants to abuse their 501 (c) (3) it’s fairly simple: they can go through the application and approval process without employing or contracting any employees and, then, once they receive their exemption begin compensating business or family relations and never update or report those changes. The annual IRS requirements for churches, in particular, are practically non-existent and if they keep a low profile the IRS probably wouldn’t give them a second look: for now, anyway.

But, even if the IRS has a hands-off attitude toward churches (and, I’m glad they do), it doesn’t exempt Christian organizations from following the letter and spirit of the IRS code, acting ethically in their dealings as a corporation, and handling their finances in an honorable, Biblical manner. So-called churches or Christian organizations that abuse their 501 (c) (3) or jeopardize their tax-exempt status are unwise stewards of God’s provision and poor leaders. They may never get caught or found out by the IRS, but the Lord knows their deeds:

But the day of the Lord will come like a thief, and then the heavens will pass away with a roar, and the heavenly bodies will be burned up and dissolved, and the earth and the works that are done on it will be exposed. (2 Peter 3:10 ESV)

The frauds and covetous and greedy who abuse their 501 (c) (3) are sometimes caught and make the headlines, bringing derision on Jesus and the Gospel. And, for each one that is exposed, there may even be dozens that are abusing their tax exemption that we will never know about — until the judgment. But, the good news is that there are plenty of good churches and non-profit charitable organizations out there with principled people leading them. Let me leave you with one real-life example.

I was dining with a couple of Christian leaders and, during the course of the conversation, one of them mentioned they were leaving the board of a non-profit they had served on and served under for decades. I asked, “why the change?” I learned that this leader’s spouse was taking a job with the ministry, which would create a conflict of interest. This leader went on to say, “I can’t be the boss of people who will be the boss of my [spouse]!” This person recognized that it would be unethical to be part of decision-making, a compensation-setting board of a non-profit organization that hired a family member. But, not every Christian holds those Christian convictions.

We can be grateful for people who follow not only the letter of the IRS tax laws but the spirit or intent of the code in preserving the privilege of exemptions for legitimate non-profit organizations and churches.

These are some helpful links beginning with the most important: the IRS Form 1023:

What if you suspect a church or charitable organization is abusing its exemption? You can file IRS Form 13909:

Here are some important things you need to know about employing family members: