Mandatory Reading for the Church Leader 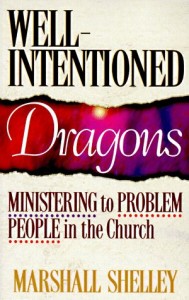 Yeah, I’m really put off, too, when someone says, “you just have to read this.” But, if you’re leading the church in any capacity and especially if you are an idealistic young (or, not so young) church planter or minister, this book is a gem.

I wish someone would have pointed me to it back in 1994, when it was first published. Of course, at that time I probably wouldn’t have thought it that helpful. After all, I had my Bible and the Holy Spirit living inside of me. I was part of a young, growing movement of Christians, multiplying and establishing on-fire churches and ministries. We had identified and avoided most of the pitfalls those who went before us had fallen into, right? Wrong.

What I didn’t know was that my greatest challenges lay in the future and one ounce of oversight and mentoring from seasoned leaders would prove to be worth a pound of youthful zeal and optimism. And, that should be an indicator of how helpful this book can be. You see, in my first decade of leadership or formal ministry, I had only experienced church problems in the areas of divorce, remarriage, infidelity, mental illness, doctrinal differences and conflict. The hard stuff would come later: down the road and around a few curves. I didn’t come across this gem until late in the game, so the book filled the role of a seasoned investigator arriving at the scene of an accident — it either confirmed hunches or revealed what had probably been going on behind the scene of the wrecks we witnessed or had been involved in.

You can usually find a copy of Well-Intentioned Dragons (WID) for as little as $6. There is a second, expanded edition out now: Ministering to Problem People in Your Church: What to Do With Well-Intentioned Dragons. The book is a primer on the kinds of challenging people you will encounter in the church, with thoughts on how to respond to their behavior from a Biblical framework, learned and applied over years of pastoral experience. The author, Marshall Shelley, provides real-life stories from a lifetime of ministry, as well as interviews and accounts from others on the frontline. He follows up each one with concise analysis and suggestions for what the leader coulda, shoulda or woulda done, in order to avoid or navigate the scenario in a godly way, always with the Gospel in view.

As is often the case, the commander-in-chief, Satan, and his minions on the other side of our Spiritual battles are not very original, so I have seen many of these scenarios played out in person. I think you’ll recognize a few, yourself. This is the first of a number of posts, which will reference WID, so I think it’s important to begin on a positive and cautionary note from Shelley himself:

Dragons, of course, are fictional beasts… they only exist in the imagination. But, there are dragons of a different sort, decidedly real. In most cases, though not always, they do not intend to be sinister; in fact, they’re usually quite friendly. But their charm belies their power to destroy… they are often sincere, well-meaning saints, but they leave ulcers, strained relationships, and hard feelings in their wake. They don’t consider themselves difficult people. They don’t sit up nights thinking of ways to be nasty… but for some reason, they undermine the ministry of the church. They are not naturally rebellious or pathological; they are loyal church members, convinced they’re serving God, but they wind up doing more harm than good. They can drive pastors crazy… or out of the church. Some dragons are openly critical. They are the ones who accuse you of being (pick one) too spiritual, not spiritual enough, too dominant, too laid back, too narrow, too loose, too structured, too disorganized, or ulterior in your motives.1

This is where I’d like to begin with WID: problem people in the church don’t generally try to be difficult or divisive or destructive. For the most part, the trouble they cause flows from a real, deep concern for Christ and His church. They love the Gospel and what Jesus did for them at the cross. They experience the transforming work of the Holy Spirit in their lives. They are on mission and can be some of the most fruitful disciple-makers. Paul’s words to the Christians at Ephesus are absolutely spot on:

Finally, be strong in the Lord and in the strength of his might. Put on the whole armor of God, that you may be able to stand against the schemes of the devil. For we do not wrestle against flesh and blood, but against the rulers, against the authorities, against the cosmic powers over this present darkness, against the spiritual forces of evil in the heavenly places. (Ephesians 6:10–12 ESV)

The well-intentioned miscreants in our midst are flesh and blood – they are people, not the enemy, and we are not to wrestle against them. If we lose sight of that fact, they become foes to be vanquished rather than brothers and sisters to be won through love, patience and forbearance — and, in some cases, discipline.

Charles Spurgeon, who had seen his share of dragons, reminds us in his winsome way:

The most useful members of a church are usually those who would be doing harm if they were not doing good.

And, this is one reason I’m so high on this book. Shelley takes his reader beyond the place I would tend to dwell: downerville. So, there are problem people in the church? I tend towards pessimism (and, for good reason!) But, the Bible and Shelley stand firm to remind me that the Gospel brings transformation. You and I do not have that power, but we do have a calling on our lives to faith and faithfulness in living and loving within our community: the church. This is especially true of leaders. This book will help us to fulfill that call.