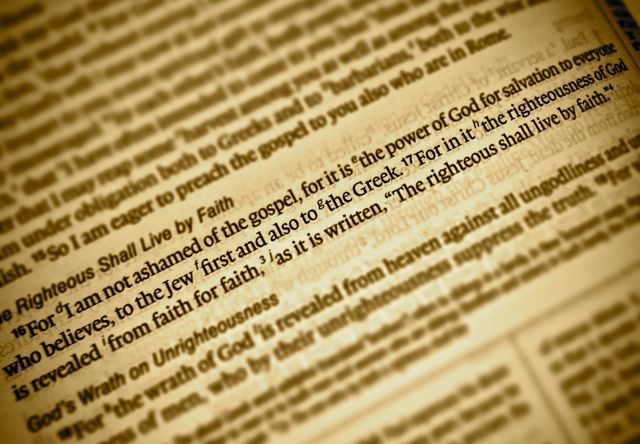 For I am not ashamed of the gospel, for it is the power of God for salvation to everyone who believes, to the Jew first and also to the Greek. For in it the righteousness of God is revealed from faith for faith, as it is written, “The righteous shall live by faith.” (Romans 1:16–17 ESV)

Because the gospel or good news is the “power of God for salvation to everyone who believes,” it just makes sense that I would want to be able to communicate that good news: I want to be fluent in the language of the gospel. But, more than that I want to gospel myself, remembering that the gospel that saves is the gospel that sanctifies – what Jesus has done for me is at work in me, transforming me into His image.

So, how do I go about doing that — how do I become fluent in the gospel? Well, just like learning any other foreign language (yes, the gospel is foreign to fallen, broken people),  immersion into the culture seems like the way to go, hearing and speaking gospelese as often and as well as possible, in order to assimilate.

A number of years ago, our church drafted a mission statement for the first time and it was ambitious! It was so ridiculous, in fact, that we wondered if we were really hearing from the Lord. Nevertheless, we embarked on that mission by taking some concrete steps.

“In his heart a man plans his course, but the LORD determines his steps.” (Proverbs 16:9 NIV)

For years, we had been a “family-first,” inwardly focused bunch. Our name identified us with the community here in Nevada County, but the reality was something else. We actually directed most of our time, talents, treasure, and toil into serving our own parochial, narrow interests, with each group vying for the resources and opportunities. So, where would we start in turning that culture around to replant as a new community of Christians?

The first step was to leave our old identity behind, along with the “fortress” mentality that built up over the years. Rather,  we set out to become more like an embassy of the Kingdom in our neighborhood – in our world. Our midweek “family Bible study” was opened up to everyone, including friends, neighbors, and strangers — and, they seemed to stream in. Then, we began praying on Friday evenings — every Friday for about two years, seeking God’s direction in fulfilling our mission and His provision of greater resources to reach those lofty, seemingly impossible goals in our ridiculous mission statement. Finally, we immersed ourselves in the language of the gospel – we became fluent in the gospel.

We sought to join a church planting network as an established church, so I was assessed as a church planter and assigned a coach. That’s when I was introduced to The Gospel-Centered Life — the coaching began with the gospel. The emphasis was not on strategy or fund-raising or theology of mission or even developing leaders, but reliance upon the power of God, in the gospel. Other helpful resources had come to light through my dialogue with Soma Communities and soon I was collecting Gospel-centered resources from around the web. Of the three major steps we took, becoming fluent in the gospel proved to be the most effective.

Okay, so what is Gospel Fluency and how do you or I master the language of the gospel? Well, I could try to explain it, but Jeff Vandersteldt already does a fantastic job and, if you spend some time here, you’ll be off to a good start. I’ll include a few links to other materials that are very helpful, but I want to highlight one of my favorite exercises from those good old days when we were on mission and moving out into the community with the good news.

Put On Your Gospel Ears

While we were immersing in the language and culture of the gospel, we would occasionally have someone prepare a 10-minute “testimony” about how they came to faith in Jesus Christ and the ways in which the gospel was transforming their life (they would prepare a week or two in advance). Before presenting the testimony, I handed out instructions to the group, along with about a page of Scriptures that highlight what the gospel has accomplished in the life of the believer and how its transforming power continues to work in us. Here’s just one example:

Then I gave them instructions to listen to the testimony with their “gospel ears” switched on, prepared to identify and discuss what part the gospel played in the various stages of the testimony.

I’m going to pose some questions after we listen to a gospel story and I’d like you to think about your responses – we are training our hearts and minds to be informed by the gospel. In other words, we want to relate how we think, what we feel, and how we express our thoughts and feelings to the gospel.

We are training ourselves, in order to:

1. Communicate the gospel clearly to those who are perishing

2. To speak the truth, the gospel truth, in love to those who are being saved

3. To know what is the hope to which he has called you, what are the riches of his glorious inheritance in the saints, and what is the immeasurable greatness of his power toward us who believe, according to the working of his great might that he worked in Christ when he raised him from the dead and seated him at his right hand in the heavenly places (Ephesians 1:18–20 ESV)

We pointed out that Paul, the apostle, was heading to the church of Rome to preach the gospel to Christians when he wrote:

So, the gospel is not only for evangelism, but life in community — gospel community — the Body of Christ. This exercise not only helped us to listen with gospel ears and hear what others say, but it reminded us to reflect often upon how we came to know Jesus in the past and are being transformed today by that same gospel — the power of God for salvation and the revelation of the righteousness of God in our own lives.

Gospel Fluency – an interview with Jeff Vandersteldt at The Gospel Coalition