On The Waterfront: A Missional Movie Moment 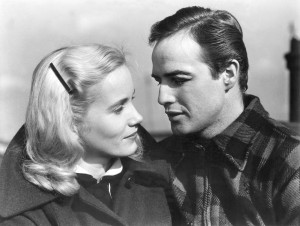 It’s been said that the Bible is a treasure-trove of stories that translate into great film. Last night, I watched On The Waterfront for the second or third time and finally got it: The film is chock full of Biblical themes and Christ is exalted throughout this wonderful love story!

First, On The Waterfront is a story of young love. That’s what captivated me the first time around. This ironic romance involves a disgraced boxer and union thug, Terry, and Edie, the sister of a man who was murdered for exposing corruption on the waterfront. Edie doesn’t know that Terry was the one who set up her brother, Joey. My heart melted again as I watched Terry and Edie (Marlin Brando and Eva Marie Saint) being tossed back and forth, as their passion for social justice and one another developed into a seemingly irreconcilable paradox, in which one love would have to triumph over the other. I tend to be a romantic. So, I was captivated by these two young people, growing in love for one another in a toxic environment that eventually poisons every human relationship in this morality play. Their troubled romance rivals Romeo and Juliet, George Bailey and Mary Hatch or Bo Salisbury and Denise Short. Edie sees something noble buried deep inside this troubled loser, but her survival instinct tells her to run. And, why shouldn’t she? After all, even Terry has to admit he’s a failure:

Edie surrenders to her affections for the enigmatic day laborer and hero,  justice is served when Terry demonstrates that he is a class act, and the two live happily ever after. At least that’s where we’re left at the end.

Second, On The Waterfront is a passion narrative! Spoiler alert: If you haven’t seen the film, I’d stop reading right now and go watch it on Netflix or Amazon Prime. The first time we meet the parish priest played by Karl Malden, Father Barry, he’s standing over the smashed body of Joey, doling out the standard euphemisms and cold-comfort religious clichés for these kinds of occasions (mob hits). Joey’s been thrown off the roof and onto the pavement, but nobody’s talking. Edie calls Barry out on his insipid, cloistered brand of Christianity: “What kind of saint hides in a church?” Father Barry is shamed and deeply convicted, examines himself to see whether he’s in the faith, and resolves to join the crucified: God’s people marginalized, exploited, and murdered on the waterfront. His preaching in church and on the street is transformed, burning blazing with a Christ-centered, missional passion:

Some people think the Crucifixion only took place on Calvary. They better wise up! Taking Joey Doyle’s life to stop him from testifying is a crucifixion. And dropping a sling on Kayo Dugan because he was ready to spill his guts tomorrow, that’s a crucifixion. And every time the Mob puts the pressure on a good man, tries to stop him from doing his duty as a citizen, it’s a crucifixion. And anybody who sits around and lets it happen, keeps silent about something he knows that happened, shares the guilt of it just as much as the Roman soldier who pierced the flesh of our Lord to see if he was dead.

The story unfolds and comes to life in the fallen world of rundown parks and dilapidated tenements, inhabited by people living from paycheck to paycheck. Jesus moves freely around this world of shades, putting everyone on the spot. Father Barry is His first target: when judgment comes, it begins at the House of the Lord. He repents, his ministry is transformed and the local community becomes his mission. “Boys, this is my church! And if you don’t think Christ is down here on the waterfront you’ve got another guess coming!” Christ confronts the corrupt union bosses and their kingpin, union president Johnny Friendly (Lee J. Cobb), just as he did the Pharisees and Sadducees. The Lamb, slain before the foundation of the world, spares no one, testing even the faith of the true believers and martyrs: those brave enough to stand up to the powers of wickedness that make the waterfront work.  No one escapes His notice and the Good Shepherd is just as hard on the crowd that complains the most and cries the loudest, but just can’t seem to commit one way or the other in this cosmic battle between good and evil. They are the “D&Ds” on the waterfront, the “deaf and dumb,” who “don’t know nuthin,'” in order to save their own skins. This is the same multitude that followed Jesus through the Gospels but, in this contemporary Gospel parable, they’ve lost their way and meandered onto the docks of New York.

Terry’s conscience is bothering him, because he’s been hiding, denying really, his role in the murder of Edie’s brother. He unwittingly set Joey up, when Johnny Friendly’s thugs came looking for the stool pigeon (who happens, like Terry, to raise racing pigeons). He thought they would just “lean on him” a little. After repeated attempts to silence his conscience, Terry’s own brother (Rod Steiger) is murdered by Friendly and he snaps. Terry takes his brother’s gun and heads down to murder the boss, but Father Barry has a better plan: Terry can spill his guts to Waterfront Crime Commission and break the mob’s stranglehold on the laborers. Our hero decides not to live and die by the sword, but his testimony against the wicked rulers on the waterfront marks him out for crucifixion.

The film reaches its climax, when Terry confronts the corrupt leaders (Pharisees) at the union hall (the Temple). The crowd, who once loved Terry, turn their backs on him for snitching. The thugs (Roman guards) beat him to within an inch of his life, out of sight (the Governors headquarters). The crowd stands at a distance. Father Barry and Edie pushed through this mob of “D&Ds,” down the catwalk and come to Terry’s aid. Father Barry (God the Father?) and Edie (Holy Spirit?) lift Terry up and beg him to do the impossible: head back up the catwalk (Via Dolorosa) and lead the union members past the evil rulers and into the work they were called to. Terry, bloody and beaten beyond recognition, rises up, staggers toward the prize, halting and stumbling under the cross he is called to bear. The poor and disheartened longshoremen take courage, following him across the Hudson River (the Jordan River)1 and into the dock ( the Promised Land). Humiliated, disarmed, and impotent, Johnny Friendly (Satan) is reduced to yelling threats at the workers (the people of God) as they make their exodus from fear to freedom, behind a triumphant Terry! The door of the dock comes down with Terry and the longshoremen safely inside, while “the dogs and evildoers” are shut out. The end.

Finally, On The Waterfront is a manifesto for missional Christians. Of course, it doesn’t surprise me that I never noticed this before because, when it comes to critical analysis and mining meaning out of movies, I get a D (it looks like  Wikipedia and a lot of others didn’t get it either). I’m amazed at how dense I must have been the first time I watched this film. The plot effectively fleshes out the incarnate Christ, who confronts injustice and evil on the waterfront, in and through the people of God: the poor, ignorant longshoremen and their families. There are no intricate plot turns or elaborate clues pointing to a surprise ending, as in The Sixth Sense. Instead, the film displays all the subtlety of an upper cut to the jaw, telegraphing a flurry of punches that will eventually lead to a knockout! The dialogue and story are unabashedly incarnational and missional, as Jesus Christ and His Body invade the wharves of New York City.

The message of the film is simple and unabiguous. Christianity is not a private religion, but is to be lived out on the waterfront, in this present evil age. God’s people are on exodus to the new heavens and new earth. En route, the Gospel community lives out their faith, standing  firm in the Gospel, while standing firmly against the rulers of this present darkness.  Authentic Christians will follow the Lamb wherever He goes and lay down their lives for “the multitude,” the “D&D” wandering the deadly no man’s land of doubt and unbelief. The robust message of the authentic Gospel is their only hope: and, ours.

Now I would remind you, brothers, of the gospel I preached to you, which you received, in which you stand, and by which you are being saved, if you hold fast to the word I preached to you—unless you believed in vain. For I delivered to you as of first importance what I also received: that Christ died for our sins in accordance with the Scriptures, that he was buried, that he was raised on the third day in accordance with the Scriptures (1 Corinthians 15:1–4 ESV)