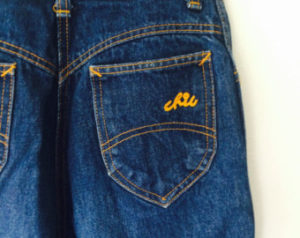 This morning I was getting dressed and noticed a design flaw in a pair of corduroys Denise found for me at the local thrift store. This defect makes them uncomfortable in some, but not all, situations. So, I tolerate them. Over the years, I’ve noticed that clothes I buy at the thrift store or some overstock/bargain outlets like Ross or Marshall’s have some quirky characteristics such as too few belt loops, shallow pockets, buttons too high on the collar, or inaccurate sizing (just to name a few). I always wonder if that’s why an otherwise attractive garment failed to sell or was returned or discarded to a thrift store. If the defect in the item is not too obvious or uncomfortable, or inconvenient, I’ll gladly wear it for a fraction of the cost of a quality garment.

While discussing this with Denise, I was reminded of a humorous anecdote — one of the hundreds of comical vignettes I’ve collected while working for the Postal Service, mostly in small rural Post Offices. This one took place in Camptonville, a little town that popped up during the California Gold Rush. When I arrived in 1988, the place was considerably rougher than today and often felt like I’d gone back in time to the Wild West.

There was a miner living in town: a native of Texas. He was a rough, gravelly voice, Sourdough who always seemed to be living just outside the law. Well, a couple of years before he passed away (rest his soul), he fell on hard times. Years of living out in the open on the river, as well as hard-drinking and carousing, began to slow down his clock. Now, I knew a number of men and women like old Leonard1 in town, living on the wild side, relatively peaceful, but always sketchy. Most of them never gave me trouble like some of the criminals and ner-do-wells, who hide out in our small towns here in the Sierra. I always figured I got treated a little better than most because I was Federal.

Leonard came in one day during rough times and needed to take care of some financial business with a money order. His beard and hair were wild, he was barefoot, had no shirt on, and his belly was hovering over his belt around his snug jeans. When I came up with the total, he went searching in his pockets for the last bit of change to complete the transaction. I noticed he was really struggling and it took him literally minutes before he could painfully coax the coins out, cursing all the way and lamenting how the pockets on these new-fangled designer jeans seemed to be getting smaller and smaller. As an aside, this kind of banter was part of the job. Serving as a rural Postmaster is a lot like tending bar. Many people’s troubles and complaints have nothing to do with the Postal Service, but we are happy to fill a number of roles: counselor, pastor, mediator, friend, and fashion advisor.

When the cussing ceased and the transaction was completed, I slapped a stamp on the envelope and Leonard wheeled around to leave. I put the cash in the drawer, said my goodbyes, and looked up as he headed out into the lobby. I noticed what I thought were embroidered flowers on the back pocket of his jeans and thought that was a bit odd, even out here in Hippie country. Most miners don’t embroider their jeans. I squinted my eyes to get a better look and there it was: the Chic logo! It took me a couple of seconds to realize Leonard had picked up a pair of women’s jeans at the thrift store and, like myself and many other men, had no idea that women’s jeans have smaller pockets in the front! I confirmed that with Denise when I got home. I was amused at the sight of a crusty old prospector heading past my window and on up the street of this rough and tumble mining town sporting a pair of tight 80’s women’s jeans — and, nothing else. Looking back, I think Leonard may have actually been a trendsetter with his skinny jeans.

Someday, I’ll talk about the differences I noticed between men and women in the Postal Service, where the use of ink pens is crucial to the mission.

The Last Postmaster of Camptonville