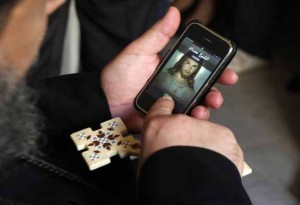 Bruce Hindmarsh is the James M. Houston Professor of Spiritual Theology at Regent College in Vancouver. Perhaps you’ve heard the term Spiritual Disciplines. Bruce is an historian who thinks we’re entering uncharted territory with social media, communication via screens and devices, as well as a shrinking number of people who remember a time without the internet. One of the remedies to this phenomena? Dr. Hindmarsh suggests that God may be calling some Christians to become digital monks. Is it possible that God is calling you to eschew a digital culture, in order to live a life of handmade writing (letters), no internet and, perhaps, only a phone (and, a landline at that)?… Read the rest

Timothy Keller: Belief in an Age of Skepticism?

Here’s an “oldie but goodie” from March 4, 2008, at The University of California, Berkeley

Timothy Keller begins by stating the concern that belief  in religion and Christianity, in particular, is  “too divisive in a free democratic society” People with strong religious convictions, “feel impelled… to impose those beliefs and… to really oppress and marginalize people.” He concedes, “I do think that religion is part of the problem with the world,” but goes on to state that robust, crunchy religion is on the ascendancy, so we must find a way to deal with exclusive truth claims. Get a drink and snack, settle in and give him a listen.… Read the rest

The Lordship of Christ over the whole of life means that there are no Platonic areas in Christianity, no dichotomy or hierarchy between the body and the soul. God made the body as well as the soul, and redemption is for the whole man.

I tend to do things backwards. I suppose that’s part of the process in being redeemed. I finally poured the content into the pages that define what this site is about. You can read them here at Passion, which is singular, and over here, at Interests. I have one Passion, but many Interests and this site will explore the interplay between them in the life of a human being, who is being redeemed: me.
… Read the rest