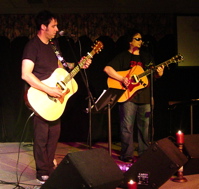 It’s been 15 years since I last saw Mike Roe perform with the 77s, my favorite band. Last Monday the Nevada County Chapter of the Mike Roe Fan Club traveled down to Auburn CA to see the Roe vs. Pritzl Winter Tour at the Fishbowl Cafe. The set began with Mike Pritzl of The Violet Burning singing some of the most serious, introspective and spiritual songs I’ve heard in a long time. After about 40 minutes, he introduced Mike Roe sporting a pair of secret agent style sunglasses. Mike sang some new favorites and some old ones, too. His guitar playing was muscular and his vocals were flawless. It was great to hear him again and we were in a wonderful spot — front row sofa center. Then, they brought their Lewis and Martin comedy team to the stage, trading inside jokes, barbs and humorous anecdotes from the road, almost going to blows over Mr. Pritzl’s outspoken disdain for Lynard Skynard (who Mike Roe saw live twice). My favorite of the evening was Mike Pritzl taking the lead on Roe’s I Can’t Get Over It. We enjoyed talking to the two Mikes after the show, as well as Mike R’s daughter, Devon Siobhan. I tried to extort money from Mr. Roe, flashing a set of potentially embarrassing photos I had taken of him twenty years ago, clad only in a long mohawk, tie-dyed t-shirt, plaid trousers with suspenders and Converse tennis shoes. Rather than recoil in horror, Mike seemed to really enjoy them and I heard belly laughs from Devon. We’ll see if they show up on a website somewhere, ending his career.