A Different Take On Palin 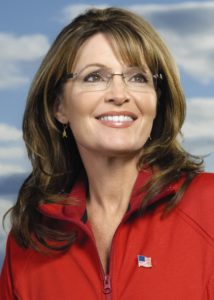 People are clamoring for change. Here are some fresh perspectives on Sarah Palin for a change.

First, this editorial from the UK:

In short, far from being a small-town mayor concerned with little more than traffic signs, she has been a major player in state politics for a decade, one who formulated an ambitious agenda and deftly implemented it against great odds.

Her sudden elevation to the vice-presidential slot on the Republican ticket shocked no one more than her enemies in Alaska, who have broken out into a cold sweat at the thought of Palin in Washington, guiding the Justice Department’s anti-corruption teams through the labyrinths of Alaska’s old-boy network.

The New York Times got it wrong. And Charlie Gibson got it wrong. There is no single meaning of the Bush doctrine. In fact, there have been four distinct meanings, each one succeeding another over the eight years of this administration — and the one Charlie Gibson cited is not the one in common usage today. It is utterly different.

He asked Palin, “Do you agree with the Bush doctrine?” She responded, quite sensibly to a question that is ambiguous, “In what respect, Charlie?” Sensing his “gotcha” moment, Gibson refused to tell her. After making her fish for the answer, Gibson grudgingly explained to the moose-hunting rube that the Bush doctrine “is that we have the right of anticipatory self-defense.”

I know something about the subject because, as the Wikipedia entry on the Bush doctrine notes, I was the first to use the term. In the cover essay of the June 4, 2001, issue of the Weekly Standard entitled, “The Bush Doctrine: ABM, Kyoto, and the New American Unilateralism,” I suggested that the Bush administration policies of unilaterally withdrawing from the ABM treaty and rejecting the Kyoto protocol, together with others, amounted to a radical change in foreign policy that should be called the Bush doctrine.

That’s not all. A real feminist, Camille Paglia, appreciates the appearance of Sarah Palin on the scene, even if she does not share many of the same ideas, politically:

Conservative though she may be, I felt that Palin represented an explosion of a brand new style of muscular American feminism. At her startling debut on that day, she was combining male and female qualities in ways that I have never seen before. And she was somehow able to seem simultaneously reassuringly traditional and gung-ho futurist… Over the Labor Day weekend, with most of the big enchiladas of the major media on vacation, the vacuum was filled with a hallucinatory hurricane in the leftist blogosphere, which unleashed a grotesquely lurid series of allegations, fantasies, half-truths and outright lies about Palin. What a tacky low in American politics — which has already caused a backlash that could damage Obama’s campaign. When liberals come off as childish, raving loonies, the right wing gains. I am still waiting for substantive evidence that Sarah Palin is a dangerous extremist. I am perfectly willing to be convinced, but right now, she seems to be merely an optimistic pragmatist like Ronald Reagan, someone who pays lip service to religious piety without being in the least wedded to it. I don’t see her arrival as portending the end of civil liberties or life as we know it.