I promised Zombieslayer a post about my short venture into the world of record producers, fusion guitarists, “shred-heads” and, of course, those vultures who bring all fun to a halt — lawyers and record distributors. Dear ZS… I hope this meets with your approval.

One day sometime in 1990, I believe, I came home from work and Denise told me she had met some new neighbors and they were real nice. She said that “Mark” produced and recorded music – he was working on a children’s CD. I remember thinking to myself, “So, what’s new… everyone in Nevada City is recording a CD.” Well, we got together for dinner and I met Mark Varney and his charming family. He was a school psychologist and we talked about everything except music. The conversation turned to faith, so we invited them to church. One Sunday, Mark and I were chatting after our gathering and he told me that his brother was a record producer – Mike Varney. I said, “Do you mean Mike Varney of The Nuns?” His mouth dropped open and he said, “You’ve heard of The Nuns?” I said, “Sure, I’m a huge John Cipollina fan.” Well, we were instant pals and began gushing on about shared guitar heroes. he asked if I’d ever heard of Allan Holdsworth. “Sure! Gong and UK!”

As it turned out, Mark had his own record label, Legato Records. He had signed Frank Gambale and was about to produce a CD with Gambale and Holdsworth shredding over some fusion standards, with Chick Corea’s Elektric Band.

Here are some of the highlights of our association with Legato Records:

Another highlight was going down to the NAMM show in Anaheim in January to hobnob with the industry big-wigs and legendary musicians. I rubbed elbows with John Sebastian, Steve Morse, Neil Schon, Jorma Kaukonen and another hero, Harvey Mandel… In 1993, we got VIP passes to the Ibanez Axe Attack, a jam featuring Steve Vai, Joe Satriani, Shawn Lane, Paul Gilbert, Reb Beach and a few others I don’t recall… Lanny Cordola, perhaps? 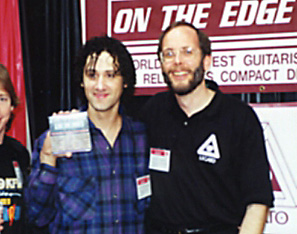 But, it was really fun when the guys signed to Legato or appearing on Guitar on the Edge stopped by our booth. For example, here’s Mark with Blues Saraceno. As I recall, he was there with his dad, because he was too young to get his driver’s license. Quite the prodigy! And, he was very nice… In fact, all of the guys we met were smart, focused, polite and a pleasure to work with. 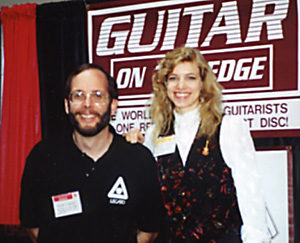 Renowned finger-picker Muriel Anderson was as sweet as could be. She and Denise got along very nicely. She’s also tiny, so we took a photo of her standing next to Mark on a chair.

Mike Varney, Mark’s famous brother and creator of Shrapnel Records dropped by to hand out promotional goodies! The fellow laughing on the left is Todd Duane, my personal favorite of all the guitarists Mark worked with. I spoke to him about his style and he explained that what I described about his music was the result of his being a drummer before he played guitar. He approaches the guitar as a percussion instrument! And, a heck of a nice guy… a real gentleman. 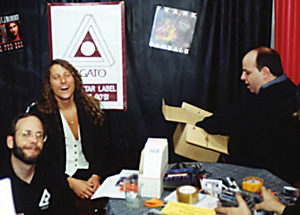 Tom joined Mark and I for this show and we got a photo of him with the legendary, now deceased, Shawn Lane.

But, best of all was our “trophy girl,” Denise. The guys all got a kick, finally meeting the “office manager” from the closet! 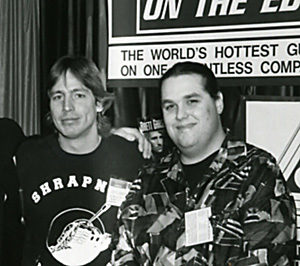 Yes, there we have many fond memories of the few years we were “in the music business.” But, the best thing of all was finding lifelong friends in Mark Varney and his family.