We’re on the road in North Carolina, visiting Emma and sampling a little bit of Carolina barbecue.

bar·be·cue Pronunciation Key (bärb-ky) n.
1. A grill, pit, or outdoor fireplace for roasting meat.
2. A whole animal carcass or section thereof roasted or broiled over an open fire or on a spit.
3. A social gathering, usually held outdoors, at which food is cooked over an open flame.

The term itself comes from Haiti: “1657, from Amer.Sp. barbacoa, from Arawakan (Haiti) barbakoa “framework of sticks,” the raised wooden structure the Indians used to either sleep on or cure meat. Originally “meal of roasted meat or fish,” modern popular noun sense of “grill for cooking over an open fire” is 1931.”

Emma’s friend Jumon insisted that, if we want some Carolina barbecue, we should start with the best: Bullock’s in Durham NC.

I had the chopped barbecue, which is the traditional spicy sauce, heavy on the vinegar. The battle over red slaw vs. white slaw was settled long ago at Bullocks and I loved their mayonaise-based slaw: sweet and diced fine. The french fries were wonderful and the service was superb. I had sweettea (all one word), but I must admit… it’s too sweet for me and that’s saying something.

Let’s move away from the closeup and you can see Emma’s choice of Brunswick Stew. It was the best with all sorts of beans and distinctive flavors.

Denise had the sliced barbecue, which is pork in a sweet sauce. Every table is served as many hushpuppies as you like and they were by far the best we’ve ever had. They weren’t too dry or too moist, but just right. Onion was up front, but not overpowering.

Denise and Emma couldn’t put those hushpuppies down. Carolina barbecue is different than the barbecue we are used to. Here are a few examples…

In Sacramento, we like Sandra Dee’s the best. It’s hot/sweet with excellent side dishes and desserts. I like the corn with jalapenos and cornbread.

In August, we spent a week with Denise’s brother, sisters and nephews in South Lake Tahoe, where we found a Texas syle barbecue worth mentioning, Womack’s. The meat was expertly smoked and fell right off the bone. The sweet potato pie was killer. 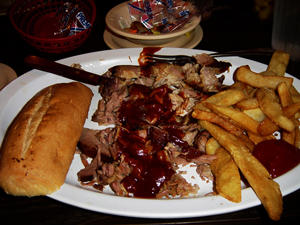 Both the Short and Salisbury families grew up on Chris-n-Pitt’s barbecue, a chain of restaurants true enough — but, as the photo demonstrates, a force to be reckoned with in the universe of American cauterized cuisine.