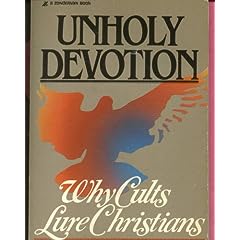 Everyone has a film, a book, a piece of art that has a revolutionary effect on the way they look at everything. And, if one is fortunate (I would say “blessed”), that may happen many times along this journey we call life.

I first read Unholy Devotion as a young Christian, involved in ministry to people caught up in cults. The book received rave reviews within the apologetics community, so it was required reading for any aspiring counter-cult evangelist !

I had no idea what I was in for. Rather than focus on cultic strategies to deceive the naive or unwitting Christian into joining the Baha’i Faith or Watchtower Society, Harold Bussell identifies cultish tendencies among mainline and evangelical groups that set up otherwise solid believers to cash in their pearl of great price for a worthless counterfeit faith, presenting itself as the genuine article.

From the back cover:

The lure of the cults is not doctrine, but style. Not reasoned faith, but the promise of a better life. Many evangelical youth are drawn to cults because too often the marks of spirituality they set forth uncannily resemble the qualities we exhibit in our own Christian churches…

Bussell comes locked and loaded, leaving the evangelical pasture strewn with the carcasses of some of our most cherished sacred cows, including these bogus bovines:

The author tells story after story of real people he has known during years of youth and college ministry, who became easy prey for the cults. Take Terry for instance:

Terry was an active leader in the youth group of the first church I served in California. He had become a Christian the previous year and gave a glowing testimony. Then, astonishingly, Terry became a Mormon… I still remember my confusion and dumfounded reaction to his defense: “But Mormons don’t drink or smoke.” As with many of us, Terry’s conversion to Christianity included adoption of specific cultural taboos important to American Evangelicals. These taboos, along with the popular emphasis on personal happiness and group support, confused Terry in his journey toward spiritual maturity… Evangelicals tend to yoke their definitions of spirtuality with certain cultural convictions… An overemphasis on taboos has misled some believers to feel more guilty about sipping a glass of wine than about sleeping with a boyfriend or girlfriend.

Rather than focus on the negative, each chapter ends with a set of questions for discussion and lessons emphasizing corrective truths from the Bible on each topic. Bussell points the reader back to Jesus and His Word — the only antidote for false gospels and faux spiritualities. In my case, it caused me to look carefully at my own faulty notions and convictions that have no basis in Christ or His Word. That, in turn, deepened my relationship with Jesus, caused me to treasure Him more deeply and to value His sufficiency in all aspects of my life.

So, this book is for every Christian. It’s not just for those who have an interest in apologetics or the cults, but for believers who want to develop their critical thinking skills, strip away harmful accretions to faith and grow in their affection for the Christ.