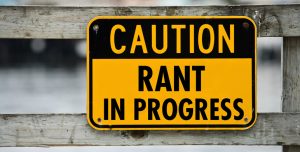 I felt a New Years rant coming on, but didn’t get around to publishing it until today.

First up: There must be something wrong with me. I’d rather eat at a taqueria than Chipotle – there, I said it – I’m out – that’s just me – not hating or judging anyone. From an early age, I always knew I was different than the rest – but, that’s another story altogether. I don’t feel any different after eating organic/fresh than I do eating other kinds of food (unlike just about everyone else on social media). In fact, I recently ingested a bunch of home cooked fresh stuff and felt terrible.

Another thing: Counties in California are outlawing useful items again, including those handy plastic bags that have revolutionized transportation of goods in many third-world nations. I’ll miss the plastic bags from the market. You see, I’m the weirdo who sometimes takes the reusable bag to the store, sometimes requests a paper bag, and often finds the plastic ones useful. I defy stereotype, and not just to be hip or nonconformist. Yes, I’m an adult and can make those sorts of decisions – I use all three kinds of bags responsibly (but, what the heck does that mean – what, or more importantly, *who* defines “responsibly?”). Sometimes, I walk to the market to bring groceries home in a plastic bag. Like many or most people, I drive my car and return with groceries in the groovy, trendy reusable bag (advertising Trader Joe’s, Briar Patch, Winco or whatever). Either way, petrochemicals are involved and I’m glad to have them (so are the people driving the scores of cars clogging the parking lot at the organic markets, but they will never admit it).

Pet lovers: Let me say this up front: I love dogs. I’ve had dogs and not had dogs – it’s either/or for me – having pets and not having pets both have their positives and negatives. Cats? Wouldn’t know, since I’ve never had one, but I seem to be okay without one – not bagging on cat owners – I’m agnostic on cats.

Dieting: I’ve controlled my weight on Medifast, OA, Atkins, Herbalife, shakes, high-carb, low-carb, vegetables, meat, natural, unnatural… I don’t see any of them as either morally superior or evil. They all seemed to work and rely mainly on my desire to actually quit being so dang fat! It’s almost as if the medium was largely irrelevant (the actual type of food or regime). I guess I’m just a simpleton.

Now, the controversy over which big box stores are pawns of SATAN: Walmart or Costco? Both thrive on unbridled consumerism, so why all the fuss? Can’t we just admit that we all want our stuff, we want lots of it and we want it now? And, we want our “big box store corporation” to lobby for our guy/gal/person in Congress or the White House? Why do we have to paint the other supplier of mass quantities of food and consumer goods as morally reprehensible?

Now that I’m over 60, I’ve seen exercise transcend anything Jack LaLane ever dreamed possible. I witnessed the rise of serious running (I was alive when the “running shoe” was invented, replacing the sneaker or tennis shoe – those are for sneaking or playing tennis: not running). I actually did aerobics in the 80s. So, this year please don’t make me choose between running, cross-training or walking real fast. You can try to pressure me into yoga or pilates, kayaking, bicycling…. whatever. I’m gonna do what I like best… what I prefer. I don’t care if it subtracts from or adds to the length of my life.