My first acrylic painting class is drawing to a close. This is the first time I’ve put serious energy into painting since high school, over 40 years ago. I’ve learned a lot from our excellent instructor, Sandra Miller, at Sierra College. And, I can’t say enough about the wonderful color theory course I had with Linda Byrne two semesters ago.

One of the most enjoyable projects was a mixed media assignment. I decided to parody (not mock) this familiar Paul Delefsen print, Serenity. Denise found it at the thrift store, heading out to the garbage. We displayed it in our patio each summer, in order to capture the feeling that we were in a cool redwood grove, on hot afternoons. The print was faded out to blue, like all cheap photographic prints do.

Artists have been painting into old art, prints, photographs, and print advertisements for years. So, this was not an original idea. But, this is my ironic turn on the serenity the original artist created, depicting a rampaging Tyrannosaurus Rex, pursuing a Lego backpacker and his faster friend, through an implausibly plausible primordial forest on the northern coast of California. 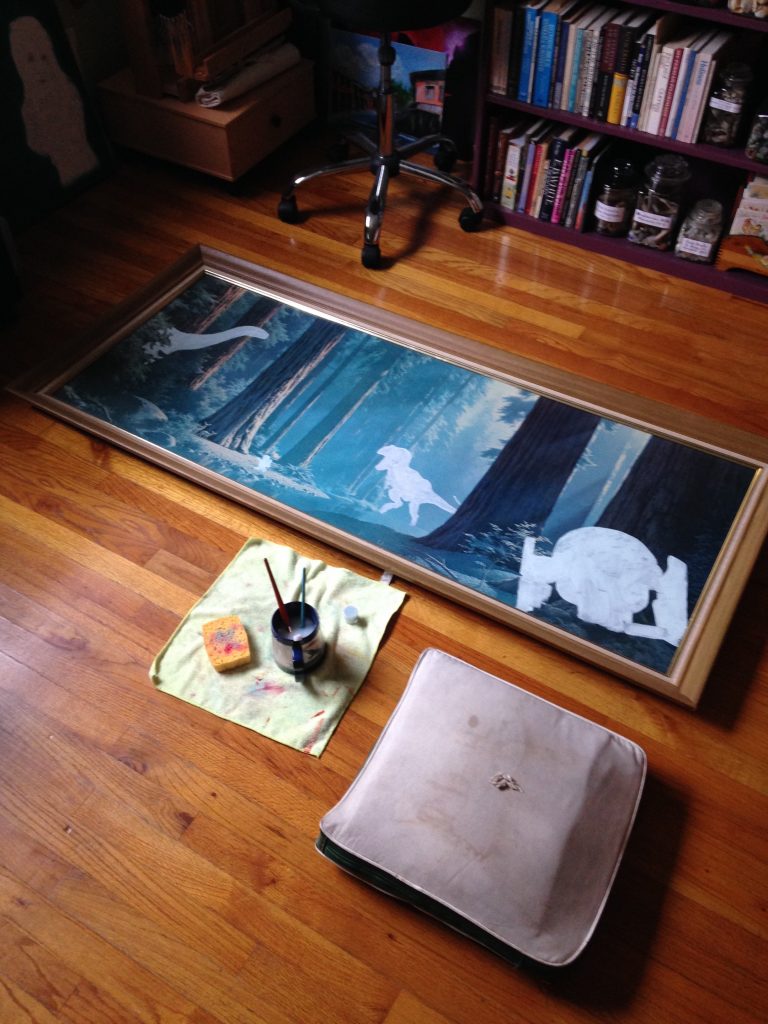 The first thing I did was create a pad for my knees, so I could work on the floor of our studio/guest room. I blocked out the characters in order to get a feel for the composition and to see how the paint would bond to the print finish. I considered adding a wrecked Lego jeep or Westfalia camper van, but didn’t want to clutter the composition and detract from the drama unfolding. I decided on the backpacker over the Lego hippie. 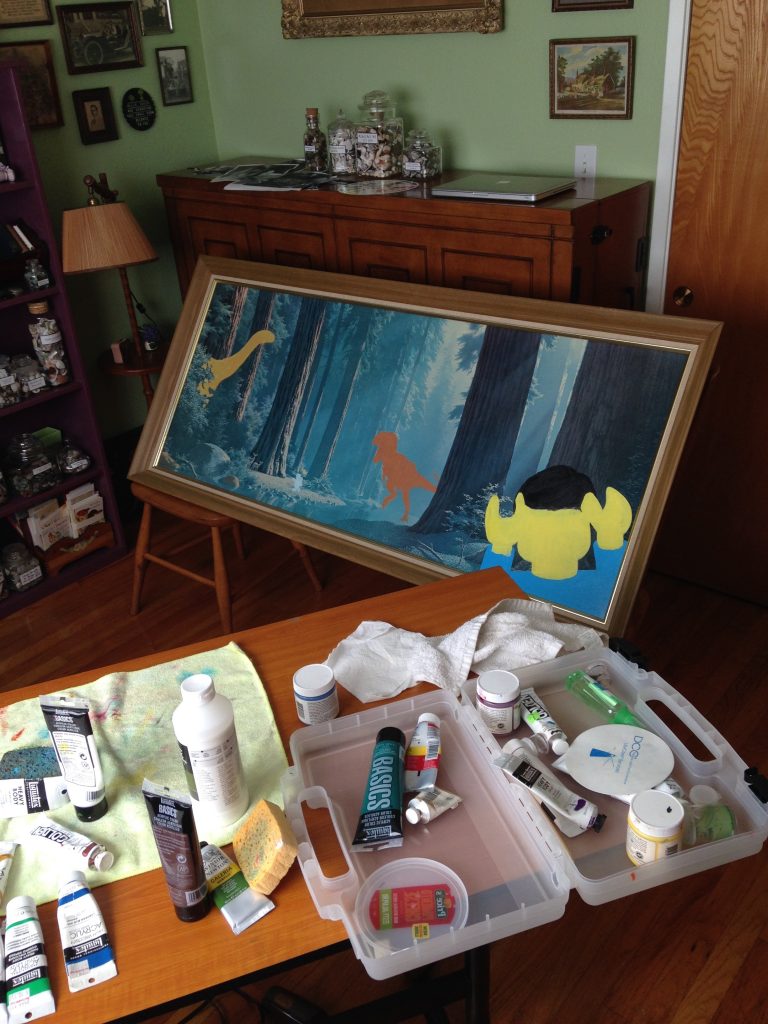 After working on the floor for a bit, I realized I could create a makeshift easel using our dining room chairs. 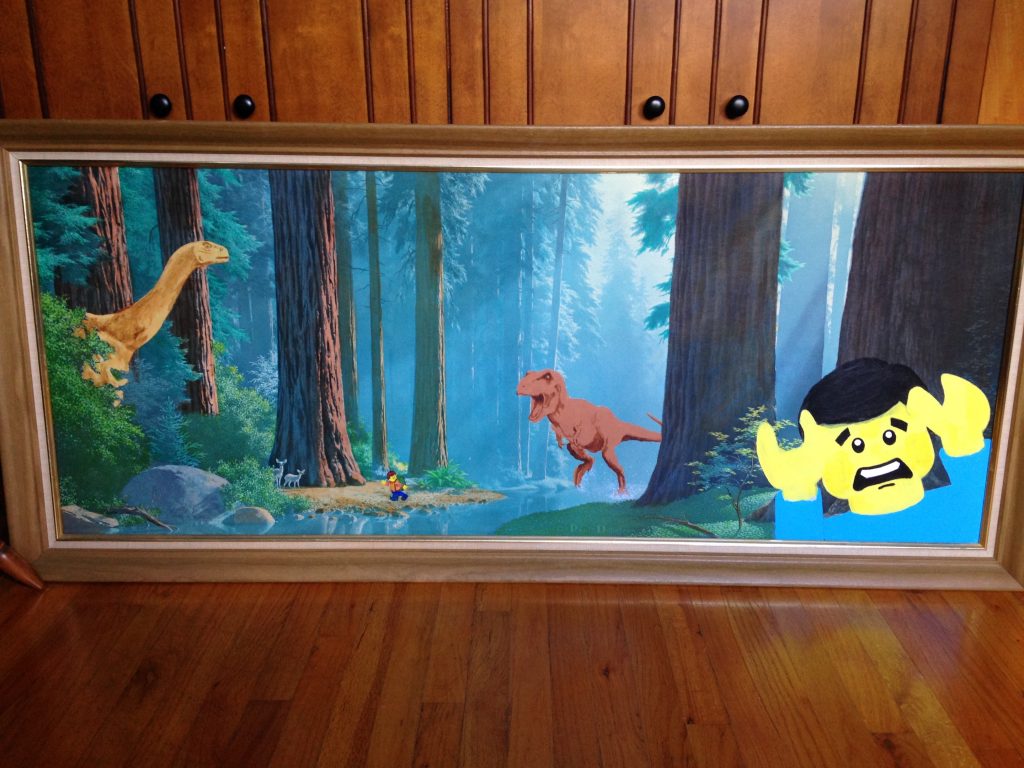 Next, I began painting in the medium values and/or basic hue of the characters. This is mixed media, so I began with the print and used acrylic paints and, in some places, permanent Sharpie pens. After determining the values and size of the characters in the composition, I had to make a big decision: How much of the original painting would I restore? 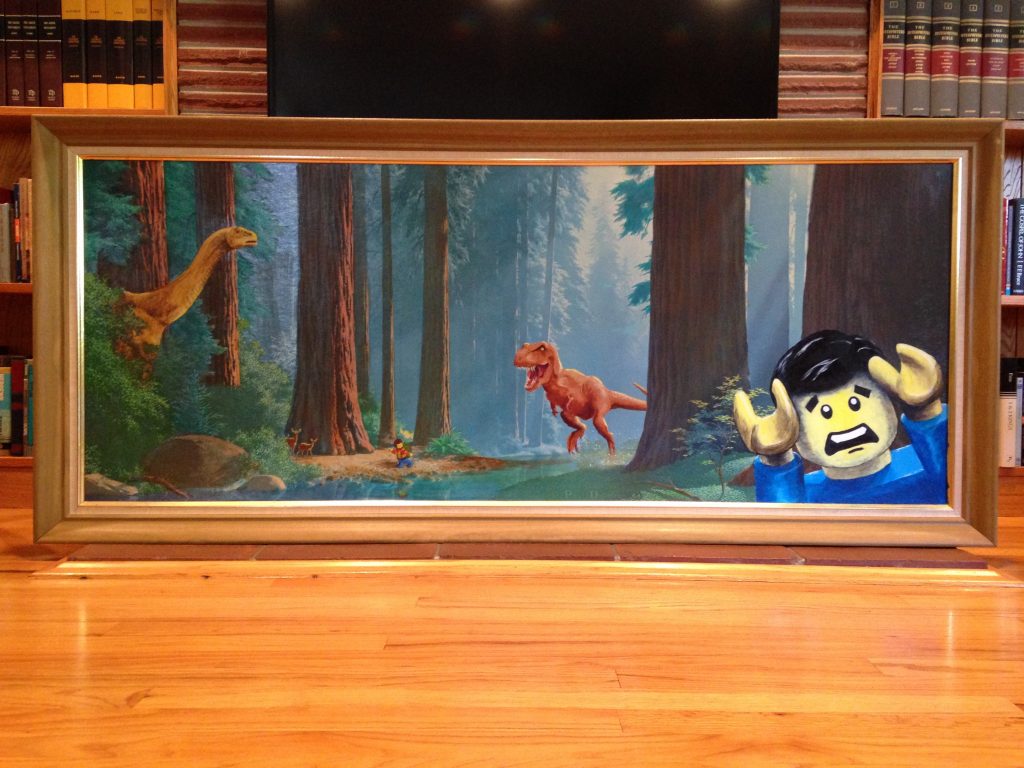 I decided I would restore everything from the T Rex forward and leave the rest looking misty and primordial, as I would imagine a dinosaur world to be. I chose to glaze over conifer tree branches with a blue-green out of the tube, which also has a hint of black in it. The other greenery was done with a more earthy green or yellows, which worked with the blueish hue of the faded print. Highlights were made with yellow. Rocks and soil were glazed with a wash of medium and water, mixed with burnt sienna, raw umber, and/or mars yellow. I thought about how I could make the stream seem more real and that was done by glazing with violet in the foreground, wet into cyan, and then wet into a sap green around the T Rex. The redwood trees were all glazed with burnt sienna and, in some of the highlights, a bit of yellow. Finally, I added the shadows of the T Rex and Lego backpacker, along with a reflection of the prey and the splashing water around the feet of the T Rex. Another pesky problem I faced, using stock yellow Lego people, was shadow. If I used black, it would go to green and that would look wrong. Color theory came to the rescue. I tried mixing a bit of black, which already is blueish, with some spectrum violet. The thought was that the red in the violet would go to orange with the yellow. That, mixing with the blue in the black, could create a decent dark brown. I think it worked. If you look at the Lego man in the foreground, you won’t see any trace of green in the shading or shadow. The final touch was the original deer in the print. They are key to the composition, because they imply serenity, as well as connection with the viewer. The one on the left is looking straight at you, the viewer. The fawn on the right appears to be looking at the running backpacker, who just caught its attention. The Brontosaurus is doing what we would imagine him to do. He is just serenely watching the events unfold. 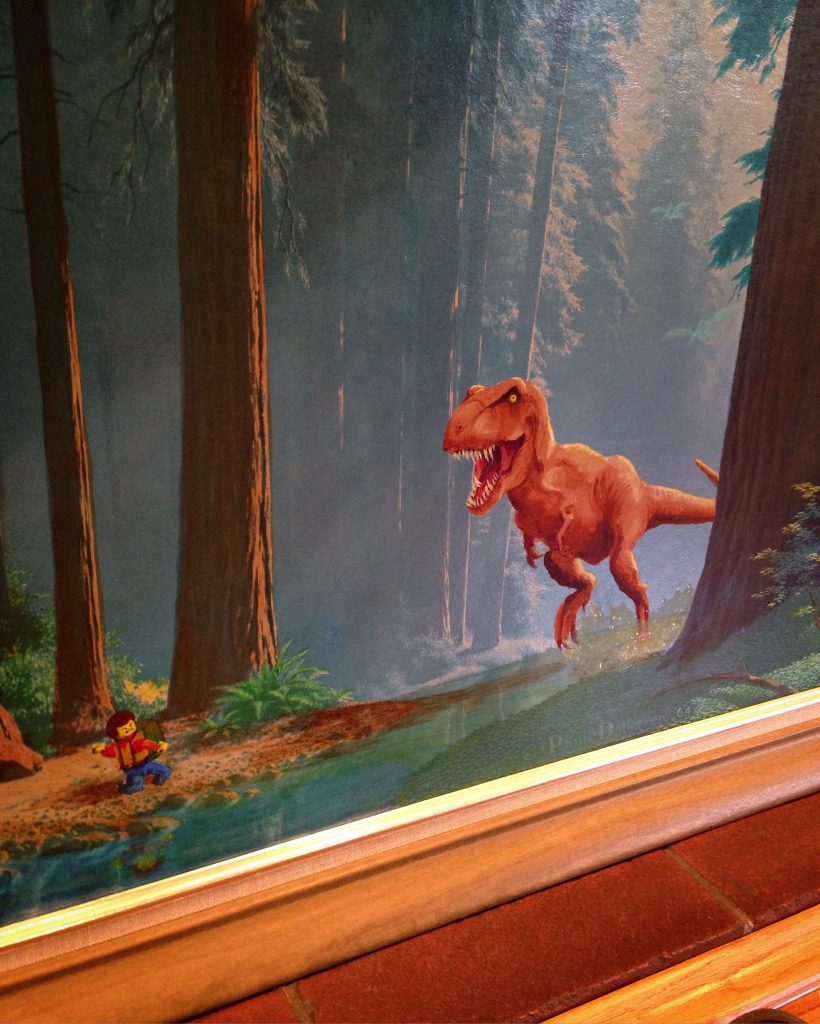 In this detail of the backpacker and T Rex, you can see the credit to the original artist, Paul Detlefsen. I created a splash on the foot of the T Rex and gave him a very beady little yellow eye and highlighted teeth to completely disrupt the serenity of the scene. In the distance, I painted two hazy Pterodactyls following along in anticipation of an opportunity to scavenge. Denise suggested I add some of their actual color and bring them out a bit more. I followed her advice and it worked. 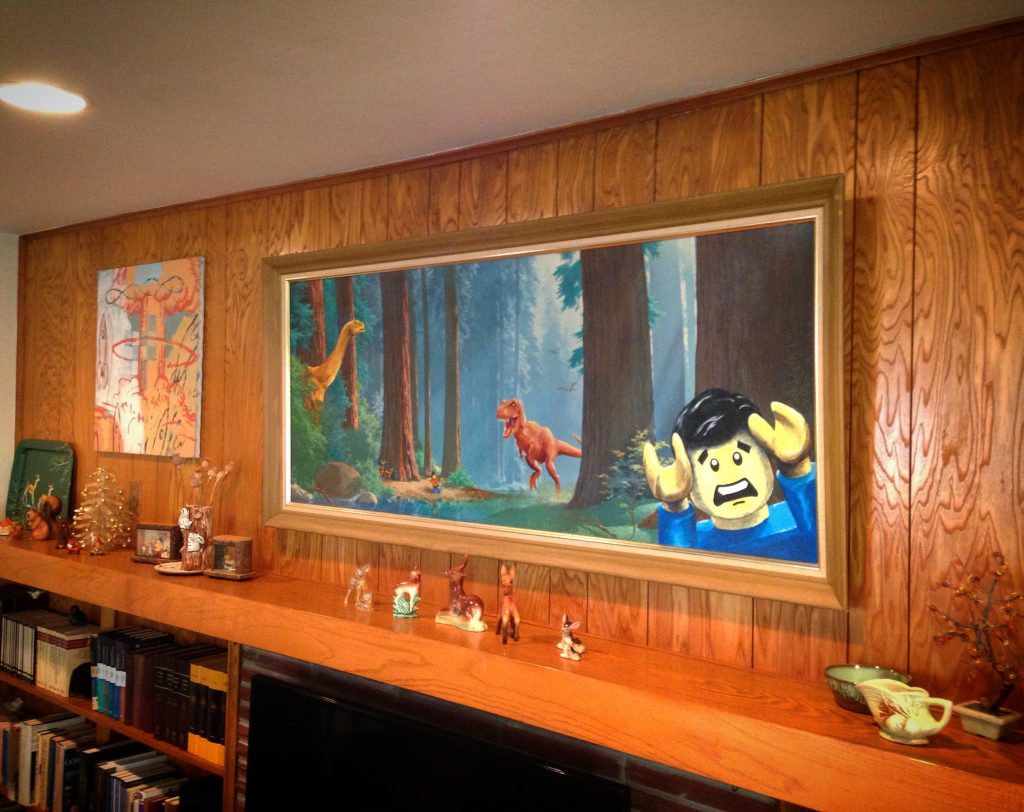 I was happy when Denise told me she really liked the finished piece and hung it over our mantle, between one of Sam’s old color theory projects and an original Osborn Woods print of Genesis on the right, out of the photograph. It seems to compliment her collection of woodland creatures on the mantle.