Star Wars: It Really Matters What You Believe

If a movie won’t be playing at a theater, will its fans still line up outside that theater for days and days? If we’re talking about “Star Wars” fans, the answer is a resounding “of course!” It says so right here: Star Wars Fans At Wrong Theater

Former Black Sabbath frontman Ozzy Osbourne donned his Emperor Palpatine getup and joined other diehard Star Wars fans outside the wrong theater, Grauman’s Chinese, for the latest installment of the legendary franchise. There was just one small problem: 20th Century Fox plans to open the film at the ArcLight theater, just a few blocks away. 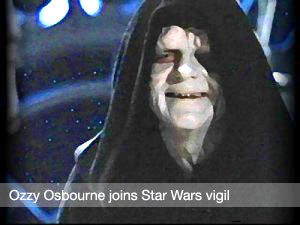 Okay, so it’s not really Ozzy, but you have to admit there’s a real resemblance. Anyway, on with the story… The simple truth that there would be no showing at their rendezvous, did not deter the faithful wookies, droids, and stormtroopers from observing their ritual outside Grauman’s. The revelation (that they had camped out at the wrong location) failed to dampen their enthusiasm and, in fact, made them even more resolute in the rightness of their position — that is, positioned in front of a theater, waiting to purchase a ticket, to see a movie, which will not be shown there! This comical situation provides some valuable insights into cultic thinking, which sometimes results when members of a committed band of devotees are confronted with information flatly contradicting their deeply held perception of reality.

As I read this article in Variety magazine, I sensed an allegory coming on. I was struck by the unique way each individual dealt with the mental discomfort experienced when questioned by “anti-Star Wars” naysayers in the press. Beyond that, I recognized some of the same thought patterns I had followed as a cult member and still do as a Christian, when my faith is challenged! Let’s identify and label some of these faulty responses with actual quotes from the article.

“We’ve heard all this before,” said Sarah Sprague, one of the designated spokespersons for the group. In 1999 and 2002, there were plenty of rumors (ultimately false) that the previous two pics weren’t going to open at the Chinese and this caused confusion. But, this time the distributor clearly stated,  “Fox and the ArcLight… say they expect ‘Revenge of the Sith’ to play the ArcLight…” Yet, Sprague was adamant the line wasn’t moving to the ArcLight. Why?  “This is still the epicenter for ‘Star Wars’ fans. For the big iconic pictures of the 1970s, people lining up were here. They weren’t at the Cinerama Dome.” So, regardless where the movie will actually be shown, the Star Wars fans insisted this was the place to assemble.

Sprague went further: “Even if it’s not here, we’ll just go see it somewhere else. We’re not doing this just for the movie… What’s the point of lining up at the ArcLight if someone is going to go online and get the best seat in the house?” But wouldn’t it still make more sense to decamp and move along, rather than spending a month outside a theater that isn’t playing the movie? Not to a Star Wars devotee: “Lining up for anything, what part of that makes any sense?” she responded philosophically.

Pragmatism in the face of contradictory and incontrovertible facts

“The telling thing is — for me, at least — if the film is not playing at the Chinese … I have zero desire to see it at all,”argued one a fan, who calls himself Obi Geewhyen in a post on the message board at Liningup.net. “I’m in it for the lineup only and don’t give a darn about the conclusion of this lackluster, so-called ‘Star Wars’ series.” At least this fellow admits that it’s not about a real movie, playing at a real theater. It’s about loyalty to the cult… er, I mean family… uh, the group.

True believers acknowledge the problem, while overestimating their ability to manipulate fate

The media-savvy bunch, waiting at the Chinese theater actually hoped press interest in covering (and most likely mocking) them would persuade George Lucas and Fox to move the booking. They were wrong, but that didn’t deter them in their crusade.

Acknowledging the obvious, yet holding on to any sliver of hope

After the last two “Star Wars” films, “We’re all a little beaten down,” Sprague said. “But this one could be it!” The faithful decided to stay, hoping they would actually be at the right premier, even though they missed the boat twice before and all indications pointed to one more disappointment.

Okay: that was fun at the expense of some fairly extreme fans. But, seriously now, how do followers of Jesus approach reality? Is there a difference? The Christian exercises faith in historical, time and space events… what Francis Schaefer calls “true truth.” If these events did not take place, then the apostle Paul tells us that we are more pitiful than the Star Wars crew out in front of Grauman’s.

If you or I shy away from uncomfortable facts or refuse to consider serious challenges to a cherished idea or worldview, there could be serious consequences. We can’t say “I didn’t know.” And, we cannot shirk our responsibility to know what we believe and why we believe it. “I was deceived” is not a valid excuse for ignorance. Jesus put it this way:

If a blind man leads a blind man, both will fall into a pit. Matthew 15:14

Notice that both the follower and the leader end up in the same pit. You know, it really does matter what you believe and it if what you believe is “true truth.” Jesus claimed to embody truth:

Jesus answered, “I am the way and the truth and the life. John 14:6

That’s a claim worth looking into.