Pastor or deacon: Are You Just Ordinary? 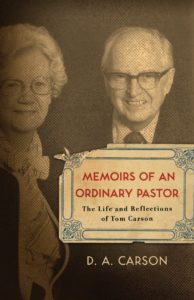 I had the opportunity to attend the Andrew Fuller Conference at Southern Seminary this past week. On my flight home, I read a book I’ve been looking forward to for years — D.A. Carson’s Memoirs of an Ordinary Pastor: The Life and Reflections of Tom Carson.

I was first drawn to this book through a couple of podcasts and/or interviews of Dr. Carson when it came out. The book recounts the rather ordinary, yet significant life of his father Tom, a Baptist pastor1 in French Quebec through the 1950s, 60s, and 70s. There are a number of reviews of the book out there and I’ll link to a few at the bottom of the post. I wanted to list a few observations from the life of Dr. Carson’s parents, Marg and Tom, which resonated with me as an older and hopefully, wiser retired pastor.

When Don Carson was a student at the Central Baptist Seminary, he learned that his father had played a significant role in the establishment of the Baptist association in that part of Canada, as well as the seminary. One lecturer ended a survey of the Baptist history in the area with these words: “One of the first things I want to see when I get to heaven is Tom Carson’s crown.” And, the first thing Tom would point out is that there would be now crown without the Gospel and Marg by his side.

Owen Strachan says, “This is one of the best books you will ever read about the Christian ministry.” I think the book is helpful for those pastors at the end of their lives to make sense of what happened to them and because of them — how their belief in the Gospel or occasional unbelief of the Gospel informs their conscience and “ their conflicting thoughts accuse or even excuse them” in assessing their lifetime of labor (Romans 2:15 ESV). But, I would invite young leaders, elders and deacons, to read this book and count the cost of serving the Church. I want to help you understand what you are getting into and then encourage you to go forward and experience the often painful and mundane joy of leading a Gospel community! It’s not my desire to discourage but encourage sober thought and reflection on the task ahead.

A good companion to this book is this video sermon series by Alexander Strauch, author of Biblical Eldership. These messages distill lessons learned over four decades of pastoral ministry in an exposition of 1 Peter 5.