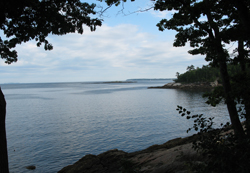 Before I begin on this post, I have to make an acerbic comment. I just looked at my blog in Explorer and it doesn’t render properly. This is WordPress, for crying out loud. Why doesn’t Explorer play by the rules? I’m actually glad Google has come out with Chrome to compete with Microsoft in the browser battles. I prefer Safari now or Camino, the Mac version of Firefox. There, I said it and I feel much better now.

As we moved south toward Portland, we found this wonderful place in Glen Cove Maine, the Oakland Seashore Motel. The cottages were cute, but we stayed in the motel.

I’m not sure, but I think we were looking across our little cove at Owl’s Head and the lighthouse there. The lodgings were simple, the way they should be, the grounds beautiful and the owners were very hospitable. We shared our blueberries with them and they were g 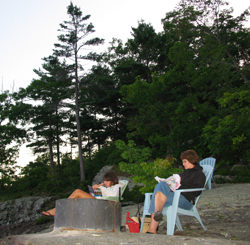 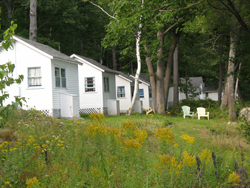 Denise and Emma passed the evening twilight reading and working on a needlepoint, of course. I sat on the ledge with my MacBook, taking advantage of the now ubiquitous wifi.

The next morning we were out on the lawn and heard the familiar sound of a lobster boat coming around the point. Denise caught a few shots of the captain weaving his boat in and out of the buoys with the sternman hauling his traps.

Did I ever tell you about the time we went to our first lobster bake? We had just moved to Maine in August of ’93 and were getting acquainted. Billy and Lorna took us out with about 20 people on their lobster boat at the end of the season, after Billy hauled all his gear out and cleaned it up real nice. We went out to Torrey Island and set everything up on the shore, including Ralph’s propane rig for making real french fries. That was wonderful. We had unlimited lobster, french fries that were salted and sprinkled with vinegar in a cardboard box, corn on the cob and red hot dogs for the kids. We left all the exoskeletal remains out on the shore and watched the tide recycle it all. Lorna showed the kids how to rake for quahogs that day.

Maine: The Vista From Away Travel