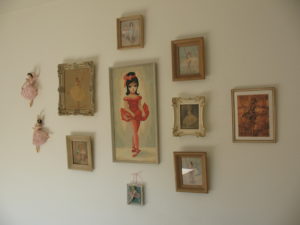 I’d like to introduce a new feature to our tens of thousands of readers. Krazy Kitsch serves to provide you with a virtual tour of our Home on Piety Hill, which Denise is transforming into a varitable museum of off beat, kitcshy kollectibles and questionable art, furniture, kitchen utensils and, well, just about everything else. Now, mind you, some items will not actually be kitschy at all, but we’ll use that as a sort of catch-all label for just about anything we think is cool. Here’s a good definition of kitsch from Wikipedia:

A term of German or Yiddish origin that has been used to categorize art that is considered an inferior, tasteless copy of an existing style. The term is also used more loosely in referring to any art that is pretentious to the point of being in bad taste, and also commercially produced items that are considered trite or crass.

Because the word was brought into use as a response to a large amount of art in the 19th century where the aesthetic of art work was associated with a sense of exaggerated sentimentality or melodrama, kitsch is most closely associated with art that is sentimental; however, it can be used to refer to any type of art that is deficient for similar reasons—whether it tries to appear sentimental, glamorous, theatrical, or creative, kitsch is said to be a gesture imitative of the superficial appearances of art. It is often said that kitsch relies on merely repeating convention and formula, lacking the sense of creativity and originality displayed in genuine art.

Take it away, Denise…

This collection now on our bedroom wall was started with finding one of the ballerina prints at a garage sale. I found the two wall pocket ones on Ebay which were being sold by a lady who lived real close to my daughter so I was able to drive over and pick them up instead of paying shipping! The largest one is a paint-by-number that is so sweet.