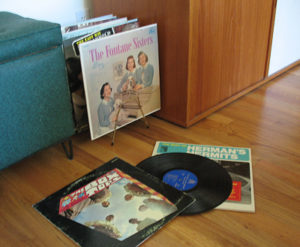 Hey, kids! Let’s have a sock hop at the Salisbury’s pad! I bought each one of these albums at the same yard sale for 25¢ apiece — much less than the original owners paid. They threw in the album stand for free! The entire display goes well with our entertainment center, don’t you think?

Bo had the Box Tops album, when he was in the sixth grade. The Fontaine Sisters and Herman’s Hermits were before our time.