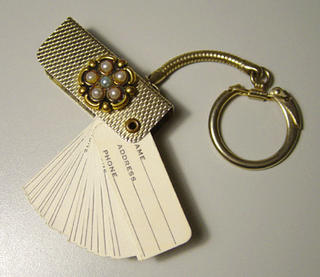 Now, here’s something you don’t often find. But, our friend, (we’ll call her “Jay” to protect her identity from blog trolls and design stalkers), is always showering us with bits of thoughtful vintage technology. This is a rare 1958 prototype of the device, which would iterate and reiterate into the modern PalmPilot. Most people are unaware that personal digital assistants or PDAs (as those of us in the industry refer to them) have been around for some time. Originally, “personal” referred to the fact that you could keep them in a purse or pocket and “digital” denoted the method of searching through the tiny contact cards with your fingers or “digits.” Later, when the miniaturization of transistors and digital (as in 1s and 0s) consumer electronics really took off, makers of these handy gadgets were thrilled to be able to retain the original “digital” label for the “mobile Rolodex.” The interface moved over time from contacts being hand written on durable card stock, to information recorded on interactive touch screen LCDs. Most busy professionals and “techies” embraced the newer technology, but there remains a loyal following of Luddites, who prefer to record their important personal information with a Sharpie on a ’58 Palm. 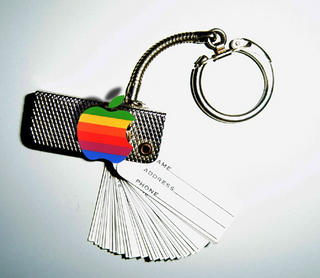 No account of the evolution of the modern PDA would be complete without mentioning that Palm was actually the “Johnny come lately” to the conception and original design of these wonders of technology. Two prominent PDA pioneers were Go Corporation and Apple Computer (Apple’s iNewton is pictured with the familiar logo). The iNewton was the first PDA ever to go into production, but it was plagued by ink “blotting” and smearing of the contact records, due to an inferior finish on the contact record cards. Apple sunk millions of dollars into the development of the iNewton, but it was doomed from the start. When Palm entered the market, they were able to build upon the foundation laid down by Go and Apple. Some say that the ’58 Palm bears an uncanny resemblance to Apple’s first entry into the market and maintain that the Palm is nothing more than a cheap iNewton knockoff. iNewton users continue meeting in user groups, where they exchange custom accessories for their aging PDAs and speculate about how and when Steve Jobs will transform the humble iNewton into the PDA of the next millenium.