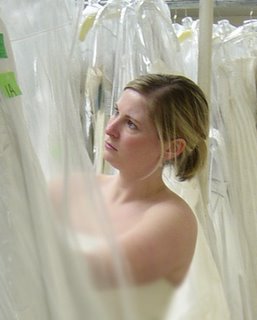 Last weekend Denise and I were invited by Camille to join her in choosing her wedding dress. It’s one of those joys of parenthood, which may only come along now and again in a lifetime. Camille looked at a number of dresses before narrowing down the choices to three. My favorite was the Rene´ Zellweger design, but Camille thought it unflattering (I pulled the photo). Anyway, I attempted to get upstairs where the action was, but got shooed away by the fitters because, evidently, there were a bunch of scantily clad young ladies and they didn’t want some old guy hanging around. Some people are so uptight… jeeeeesh!

All was not lost though, because there was a television at the bottom of the stairs for the men and the 49er’s were upsetting the Tampa Bay Buccaneers. I watched my one obligatory pro football game of the year and I’m just happy I got to see the Niners getting back some self-respect. Then Guadalupe, a landscaper from Elk Grove, introduced himself and his family, congratulated me on our daughter’s wedding and we discussed how blessed we are… really. He was there with his wife, three daughters and his son, who is also his business partner. Lupe, as he introduced himself, was beaming with pride. It was wonderful listening to their conversation ricocheting from one to another throughout the shop, alternating between Spanish, English and a combination of both, with some hip-hop lingo thrown in (I guess I’ll always have a soft spot for South Whittier, the land of my nativity).

I know it’s considered bad luck for the groom to see his bride in her dress before the ceremony, but: a) I don’t believe in such superstitions and: b) I think that it’s only fair to give Sean a head’s up concerning Camille’s style sense. So, what do you think? Camille settled on this little number fashioned by a highly sought-after designer down in Arkansas.

God is good… Camille makes a beautiful bride, even in a North American woodland camo print, don’t you agree?