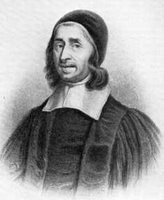 My pal Dan reminded me this week that November 12 was the 390th birthday of Richard Baxter. I can’t believe I didn’t have that marked on the calendar. I am known to refer to Baxter as “my old friend, Dick Baxter,” because I feel that I came to know him personally over the past fifteen years.

Back around 1990, a friend asked me to research and write a brief biography of Richard Baxter for his publishing company, highlighting the puritan’s abilities as a pastor and evangelist. He was looking for a book, which could be read in one or two sittings, spurring church leaders on to energetic, effective ministry in their local congregations. I was happy to do it and my life is much richer from the experience.

As in my research of the Baha’i movement during the 1980s, I experienced a number of “research miracles.” On one occasion, I submitted an inter-library loan request for Baxter’s autobiography, Reliquiae Baxterianae, because I was planning a vacation to Boston and I suspected there was a large collection of his works at Harvard and, possibly, other libraries. This was the olden days, before the Internet was public and even if you couldn’t get the book through loan, they would provide you with a printout of holdings, where copies of rare books could be found.

A card arrived in the mail from our local library weeks later informing me that my book was in. I thought to myself, “I’m not expecting a book on loan.” When I showed up, the librarian hefted onto the counter an original 1696 edition of Reliquiae Baxterianae — 1200+ pages in folio, printed in a small typeface and language of the period. I asked if there was a place I could sit down with it and how long I could access it at the library. She said, “there are no restrictions on it…you can take it home.” No way! Yes way. I was enraptured, handling the coarse 300-year-old pages in a volume that looked as if it had never been handled.

My book was never published, so I edited it for the web and created a site, Richard Baxter: Mere Christian. Most Christian readers do not realize that the title of C.S. Lewis’ apologetic, Mere Christianity, was borrowed from Baxter. Responding to an inquirer, trying to make sense of the warring factions during the tumultuous restoration of Charles II, Baxter responded that he did not align himself with any division of the church, but considered himself a “mere Christian.”

So, why would anyone in this century be interested in Richard Baxter? For starters, he played a central role in nearly every major political and religious controversy during the reign of both Charles I and Charles II, as well as the Protectorate of Oliver Cromwell.

I think the average American would be suprised to learn how profoundly those controversies affected the beginnings of this nation, influenced US history and continue to color our culture, for both good and bad, right up to the present.

Although the book focuses on the pastoral activities of Baxter, readers may find anecdotes or information, which will show them facets of the puritan movement, which have been overlooked either through simple neglect or outright prejudice in modern portrayals of the period.

Finally, Baxter lived an incredibly productive and energetic life, while in the grip of unbearable physical suffering and ill health, during unstable and dangerous times.

Is this book for you? Read the first chapter, “Good Mr. Baxter.” It will take just a few minutes and I’m certain you will want to read more about this eccentric country preacher.