Skip to content
Home > Uncategorized > What A Week
Published October 21, 2005 by BoSalisbury 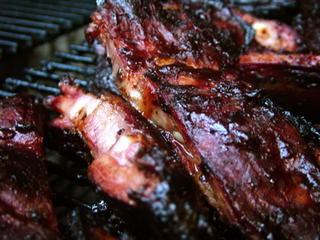 What an exhausting week. I actually stuck around work for a couple hours to catch up and now I’m listening to the Cowboy Junkies at a respectable volume. I’m one of those oddballs who, after a stressful day, will relax by hammering myself with some really loud music… it feels like getting tenderized.

The week started out well enough with barbecued ribs and beef brisket. Our trip to North Carolina inspired us and we had a hankerin’ for our kind of barbecue. I suppose I would classify it as Kansas City Barbecue or something along those lines. I’m not an expert… I just know I like it all. These ribs were smoked with maple from the tree behind me in the next photo.

Michele found me a wonderful apron for making smoke and searing animal flesh — I wear it with pride. Ryan, Natalie and Andrew brought Sadie and Dan over for a down home suppah’. Sadie brought punkin’ pie… she’s a country girl at heart 🙂

The table was set with plenty of sides. We had corn bread, brown bread, slaw (white), green beans, homemade applesauce and the blue crock holds Maine baked beans… yellow eye beans. Denise likes to use Jacob’s cattle beans, but hasn’t found them outside of Maine.

Later this week, I had to go to training down in Sacramento. They served lunch and it was, you guessed it, barbecue!!!!! I have to tell you, it was delicious and Chef Jake from Moveable Feast was there, so we exchanged strategies. He prefers cherry and apple wood over mesquite and hickory. I told him about my maple and occasional walnut. His tri-tip was perfect and had a great herb crust on it. I didn’t try the chicken, because… well, I get enough chicken.

It’s fall and Denise has created a holiday tree like the one my grandma Louise had at her house in El Monte (Emma Louise’s namesake). Denise started decorating with pumpkins and added fall leaves later. Grandma Louise had firecrackers on the tree for 4th of July and my dad would light them off under tin cans. That was sure a big deal back then.

I’ve been trying to spend a little more time alone with the Lord lately, walking or getting off by myself. Last Saturday I went searching around town for a taste of fall and I found it. I like the light and contrasts of fall; particularly the radiant, warm colors of the leaves against the cold, darkness of the bark on the maples and liquidamber.

This is the maple that borders the property with our neighbors. It can be spectacular in the fall, as long as it’s had enough water and doesn’t get too hot during October. It’s been a good year for fall in Nevada City. There was no color in North Carolina two weeks ago and our friends in Maine told us they just got their first frost today. This is very late for them.

We got our new iMac G5 about a month ago. We waited until the iLife suite had matured, particularly iPhoto. It is truly wonderful and it’s fun to have a computer that does anything you like, after struggling through the 80’s and 90’s — seeing the potential, but never realizing it. I have fond memories of Sam using Strata Studio, creating a 3D character and pushing the render button at about 10PM. We would wake up in the morning and it would just be finishing it up. Although we waited to get the iMac, we wanted to get it before our warranty ran out on the Powerbook. The optical drive in the iMac was DOA, so I called Applecare and a guy showed up in two days and swapped it out in about ten minutes. I was impressed. The drive is a dual layer DVD burner.

We have semi-retired the Powerbook. I will use it with Keynote for presentations and trips and such. Denise will use it around the house. Her computing habits were totally revolutionized by our wireless network. We had Camille’s old Presario notebook and installed a wireless card. Next thing you know, we had two laptops wireless with Emma networked via Ethernet and I even got my old Yosemite up. I toyed with the idea of turning it into a print server, but ran out of energy and time. Anyways, Denise enjoys the Powerbook very much, but it didn’t last too long…

I took the Powebook to work, sat down and got the screen open about .5 inch and the hinge popped and shot a piece of the monitor across the keyboard at me! Evidently, it was frozen and even cracked the case a bit. The hinges on the TiBooks are a known issue and I thought I’d escaped the scourge. I called Applecare, but got quite a different response than with the iMac. The agent told me a broken hinge is a cosmetic problem and not covered by the warranty. I became indignant, in a restrained way, and reminded him that it was a known issue and that the Apple discussions on their support site are full of accounts of people getting their hinges replaced. He checked with his boss and said they would repair it. Let’s hope this doesn’t turn into a saga… I don’t need another one.