Eight Women of Faith by Michael A. G. Haykin 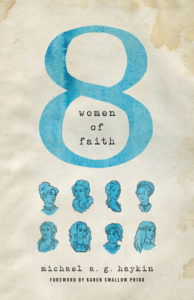 Back in June of this year, Nancy Guthrie messaged to tell me that she was reading a review copy of a forthcoming book and I was quoted in it! Well, that was exciting news. I wrote Good Mr. Baxter about 25 years ago and it has remained in obscurity for the most part. I was just happy to see that someone read it and found something of value. You can find my semi-immortal words on page 49 of Dr. Michael Haykin‘s Eight Women of Faith!

This is my mini-review of his biographical sketches of eight historically significant Evangelical women, in one volume.

Sir Stephen James, writing of Richard Baxter, said, “Men of his size are not to be drawn in miniature.” This is doubly true of women in history and, in the Evangelical world, it seems that we are only starting to turn the corner on giving the women within the movement their due. That’s one of the reasons this book makes a modest, yet valuable contribution to the literature: the reader is introduced to some remarkable human beings we may hardly know, as well as a few most of us probably don’t know at all. But, these are eight trailblazers we must meet if we are to understand where we are in the story of Evangelicalism and, for that matter, western civilization. Karen Swallow Prior, the author of Fierce Convictions, places Dr. Haykin’s book in its context and setting, while underscoring his purpose in her Foreward.

the period [covered in the book] hinges on a significant turning point in both human history and church history: the Protestant Reformation. The Reformation’s emphasis on faith alone and Scripture alone gave birth to the modern individual (and thus the evangelical tradition)–and it is the lives of women that most clearly reflect the dramatic historical shifts that took place as a result. It is women of faith, particularly evangelical faith (with its emphasis on individual salvation), who mirror most clearly this great shift in human history and culture that elevated human agency and equality.

Tim Challies, in his review, points out that the way in which these women not only mirrored their culture, but changed human history was through faith. These daughters of the Reformation had one thing in common and it wasn’t a husband or even an understanding community or supportive Church (they often didn’t):

Haykin’s goal is ‘to remind contemporary Christians, especially evangelicals, of the vital role that women have played in the history of our faith’…He means to show the vital importance of women for the life and health of the Christian church. He does not merely describe these women in relation to their husbands as so many biographers have done (at least for those who had a husband), but shows that they were godly in their own right, that even apart from their husbands they had deep faith and a desire to serve the Lord and his people. They were, indeed, women of faith.

These are Dr. Haykin’s descriptions from the book summary in bold print on Amazon.com with an observation or two from me after reading Eight Women.

Jane Grey: The courageous Protestant martyr who held fast to her conviction that salvation is by faith alone even to the point of death.

Jane Grey is representative of all the women we meet in this book: they were intellectually interesting, engaging, and faithful (faith is not irrational or antithetical to clear, logical thought). And, no, I won’t add “for women of that age” or any age.  Men or women everywhere, imbued with the knowledge that they are created in the image of God and placing faith in Jesus can and will improve on their condition or “lot in life.” Lady Grey was not only an exceptional woman, but a stately and courageous historical figure, worthy of imitation, regardless of gender. Jane Grey’s conversation with John Feckenham after learning she would be executed is as fine a confession of faith as any I’ve heard and she moved me to consider my relationship to Christ and His Body. If you want to know how her story ends, I suggest you buy a copy!

I knew absolutely nothing about Anne Steele until I read this book, though I’ve heard or sung her hymns at one time or another. Who was her muse? Dr. Haykin concludes the chapter: “The revelation of the beauty of Christ was, for Anne, deeply intertwined with the experience of reading and hearing: it was in the ‘fairer, brighter lines’ of Holy Scripture that she saw her Lord” and shared that glorious vision with the Church.

Margaret Baxter: The faithful wife to pastor Richard Baxter who met persecution with grace and joy.

I know a little bit about Margaret Baxter, so I was eager to see how Dr. Haykin portrayed her. He did a fine job and I was very pleased to see him go into greater detail about the events surrounding her marriage to Richard Baxter, as well as her conversion, than I was able to do in my book. Her awakening to the Gospel began with “a series of sermons that Baxter preached on the doctrine of conversion” and “‘received on her heart as the seal on the wax.'” They went on to live out a “Puritan love story” that is full of pathos, humor, and heartbreak.

Again, Dr. Haykin’s book introduced me (and, certainly others) to someone I may have never known: Jonathan Edwards’ daughter, Esther. Factoid: She was the mother of Aaron Burr, the man who killed Alexander Hamilton in a duel. But, Esther’s contribution to this book and the Church is her provocative conviction that friendship is a means of grace God bestows upon His children: this was a welcome and unexpected gift!

Anne Dutton was writing theological tracts and treatises before it was fashionable. In fact, it was seriously frowned upon during her life in the late 17th and early 18th centuries! But, write she did and I think Dr. Haykin’s decision to devote a considerable amount of this chapter to her writings on sinless perfection and the presence of Christ in Lord’s Supper was timely and helpful for this reader.

Ann Judson: The wife of Adoniram Judson and pioneer missionary in the American evangelical missions movement.

Ann Judson was simply an amazing person! This chapter is a great little introduction to a pioneering missionary as well as a wonderful companion to this podcast: How Few There Are Who Die So Hard! “She died on October 24, 1826, her last words being uttered in Burmese, the tongue of the people she had grown to love.”

Sarah Edwards: The wife of Jonathan Edwards and model of sincere delight in Christ.

Sarah Edwards, like her more famous husband, sought and found God in the woods. I love reading his account of conversion and encountering the beauty of Christ in nature — I return to his writings over and over. Now, I’ve found another guide to meditation and contemplation in Sarah Edwards: “She loves to wander in the fields and on the mountains, and seems to have someone invisible always conversing with her.” Thank you, Dr. Haykin, for pointing us beyond Jonathon Edwards to his companion and equal, Sarah.

Jane Austen: The prolific novelist with a deep and sincere Christian faith that she expressed in her stories.

Jane Austen — I’ve seen all her movies. Everyone knows Jane! Or, do they? Dr. Haykin makes the case, convincingly, that Jane Austen was an Anglican who once disdained “the Evangelicals,” but went on to feel a certain kinship and express her faith in very Evangelical categories and convictions. She did it privately in her prayers and publicly in her novels.

I want to end this brief review with a pet peeve I have as a complementarian. In discussing the roles of men and women among my fellow comps (both men and women), the conversation almost always devolves into a depressing, tight-fisted, grudging rehash of what women are “permitted” to do — what Jesus will let them do. The focus falls on the perceived (and erroneous) limitations of being born a woman and the tone is decidedly negative! Even if we don’t mention any Biblical prohibitions, it’s as if we are still reminding women what they can’t do, rather than affirming and empowering our creative partners to fulfill the role Scripture positively enjoins and urges upon women in the Word of God! Karen Swallow Prior nailed this dreary reality in her Foreward:

Both within the church and outside it, we too have treated in a similar fashion the biblical admonition against women preaching: we focus on the single thing that is off-limits and thereby fail to see the abundant opportunities and roles God has clearly offered, some of which are compellingly portrayed in the stories presented in this book. Likewise, the biblical admonition has led too often to extrabiblical limitations on women, as well as unbiblical oppression, also reflected in the societal restraints these  eight women experienced during their lives. This kind of failure toward women -unjustly imposed limitations on their personhood and soul equality–has sometimes led to a secondary failure: the failure to see and tell women’s stories clearly, truthfully, and well.

I think the complementarian view is the Biblical view and the Christian understanding of the roles of men and women. So, I like to approach questions of doing or not-doing within a positive or redemptive paradigm. I would rather affirm women in what the Lord positively wants them to do and cheer them on as they model Christ for His Church!

Dr. Haykin has done a fantastic job of celebrating the accomplishments of eight women and encouraging Christians to follow their examples of faith. And, what was most striking to me is that he’s done it in a way that is generous, open-handed, and encouraging to everyone, female and male — created to bear the image of God throughout His creation.